by Martin Crowson
in Rugby, Industry News, and Synthetics
on 26 May 2016

2 Artificial pitches are "not for rugby union"- Cockerill

Leicester Tigers director of rugby Richard Cockerill believes artificial pitches, like the one at Saracens, are "not for rugby union" 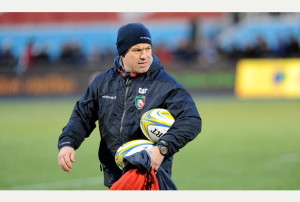 Tigers suffered their fourth heavy defeat in four visits to Allianz Park last Saturday to end their Aviva Premiership campaign on the back of a 44-17 scoreline.

Cockerill was at pains to point out that he was not blaming the pitch for defeat on a day when his side were outclassed.

But when asked about his views on the surface in the post-game press conference, he left journalists in no doubt about what he thought of the surface.

"I am not a fan of the artificial pitches at all," he admitted. "They could take them all out and make every Premiership pitch a Desso field that would provide proper grass with a mix so you have a good surface all year.

"For me, artificial pitches are not for rugby union and there should be minimal standards across the league. They should be grass or Desso.

"There are lots of grass surfaces that you can put in that would be a good product.

"My own opinion is that there are not great for the body but I am sure you could find an argument either way."

The Desso pitches, like the one installed at Twickenham are composed of natural grass combined with artificial fibres.

The idea is that while the grass is growing, the roots intertwine with the artificial fibres and designers claim this anchors the field to create a solid, even structure with good drainage, while improving recovery time for pitches after games.

Leicester are understood to be considering a Desso-style surface for Welford Road after two seasons of some difficult conditions to play on.

The after-effects of a summer music concert ruined a long strip of grass near the Holland & Barratt Crumbie Stand in 2014/15, while the pitch extension last summer created an in-goal area more suitable for growing vegetables, than scoring tries on in 2015/16.

Whether that pitch transformation goes ahead or not could rely on where Tigers see it in their long-term development plans which also include a training ground move away from Oval Park, as well as the building of a fanzone on the Granby Halls site.

Next season, there will be three artificial surfaces in the Premiership at Saracens, Newcastle and a newly-installed one at Worcester Warriors.

All three clubs are fans of the pitches which not only guarantees a consistent playing surface but also allow commercial opportunities for events and reduces maintenance costs.

For the original article, visit www.leicestermercury.co.uk.