While some sports continue to wrestle with it - football's international governing bodies see artificial turf as a cornerstone of the development of the game, particularly in underprivileged countries. Yet, national associations are all too quick to ban its use for league fixtures - others, like cricket and hockey, see it as fundamental to the continued success of their respective sports.

The future seems like an odd place to start a feature on the 'history of artificial turf' but, in cricket, rather than what has happened in the 265-year history of the game, it is exactly what might happen in the next few years that is most interesting, when it comes to pitches, anyway.

"For most sports, the need for the development of artificial turf was to simply create better playing surfaces," says Andy Carter, chief executive of Notts Sport, a leading specialist in the field and the world's leading supplier of artificial cricket pitches. The company celebrates its 25th anniversary this year and has specialised in artificial turf since day one - so they're better placed than most to know.

"But, in cricket," continues Andy, "where there is a need to create a very specialised and bespoke playing area, the use of artificial pitches is critical for the game's global roll-out."

"Countries like China are not going to build grass cricket pitches. But, we are already looking to develop a system which can be overlayed on pre-existing artificial surfaces, that have been built for baseball and football, which would enable the International Cricket Council to take the game there."

The Far East's love of gadgetry and technology can also integrate seamlessly, and more easily, with artificial surfacing than grass. PitchVision, for example, a software system which uses sensors located within the turf to record a bowler's pace, line, length and trajectory could be integrated into one of the company's flagship cricket practice products.

Adds Andy: "In developing countries, the cost of building and maintaining natural grass surfaces - combined with the lack of groundsmanship skills that has been identified within sports on a global basis - makes synthetic surfacing very attractive. And there's much wider general acceptance of this now, particularly when it comes to practice facilities."

"We've seen the major influence that technology has had in cricket and tennis in recent years with Hawkeye. Now there's an opportunity to incorporate PitchVision into a surface that would then become a complete statistical analysis tool for player and coaches."

Like most sports, cricket in the UK had its first experience of artificial turf in the 80s, in June 1980 to be precise, in an exhibition match under floodlights between Essex and the touring West Indies at Chelsea's Stamford Bridge ground.

Harry Brind, the groundsman at The Oval, who also held the same post at Stamford Bridge, was brought in to supervise the laying of a drop-in wicket but, in the end, an artificial pitch was laid.

In a carnival atmosphere, Graham Gooch smashed a 77-minute century, Viv Richards blasted 53 runs in one brutal eighteen minute period, and Collis King broke one spectator's umbrella with a flat six on his way to 56! Sadly, in the days before Duckworth-Lewis, there was no result.

But, while cricket enjoyed its brief flirtation with artificial turf, less than a year later football was thrown into chaos by it. Queens Park Rangers dug up its grass pitch and installed an artificial one, losing its first home game on September 1st 1981 to Luton Town who, ironically, went on to install their own 'plastic pitch' in 1985.

While football at grass roots level made good use of the technology - Islington Council had installed the UK's first synthetic surface at Market Road, London, in 1971 - and other councils were immediately attracted to the high-rent, low maintenance opportunity - the sport of hockey positively thrived.

Before the invention of first-generation artificial surfaces, the quick-silver skills of players from Pakistan and India had enabled their countries to put a stranglehold on the international game, winning four of the first five Hockey World Cups and eleven out of the first fifteen Olympic Gold Medals to be awarded in the sport.

But, giving stronger, more powerful nations access to super-flat surfaces for the first time, removing unpredictable bounce and lessening the need for the sublime stick work previously required to control a ball on grass, meant associations from Europe and Australia began to encourage a whole new style of game.

From unparalleled success Pakistan and India have endured an Olympic gold medal drought since 1984.

The sand infill was used to support the fibre in an upright position, and regular distribution and topping up were essential in maintaining an upright pile. Without maintenance, the pitches became hard, fast, bumpy and often lifted.

At Bisham Abbey and the National Sports Centre at Lilleshall, Shropshire, 2G water-based pitches took the game to another level, allowing players to dive headlong to deflect shots goalwards and enabling keepers to pioneer a slide-save technique, skidding prone along the surface and blocking with an ever-increasingly protected body.

Turf technology was at the very forefront of changing the face of the game. The heads of sticks became increasingly smaller to allow for different techniques, such as reverse stick trapping and hitting, players had confidence to play first-time passes and, at penalty corners, players could now drag-flick the ball at high velocity and high trajectory towards the goal.

Conversely, hockey is now coming under threat from artificial turf development. Many clubs rely on council pitches to stage their weekly fixtures, yet the local authorities themselves are replacing old installations with new 3G pitches, and the longer turf, designed to be the very best alternative to natural grass, primarily with majority sports like football and rugby in mind, is not entirely suitable for hockey.

While it looks like natural grass, enjoys similar playing characteristics, is non-abrasive, can be used with moulded or studded boots, while running, stopping and tackling are all possible, with a reduced risk of risk of injury, that's not really what hockey requires.

So, the challenge facing hockey's supremos is that the very product that revolutionised the game now poses a considerable threat at grass roots level.
Naturally, companies like Notts Sport are keen to develop a solution which gives players of all sports access to the benefits of artificial playing surfaces.
Says Andy Carter: "It is important for us to continue to develop multi-sports surfaces because these give owners the opportunity to generate maximum use from a wide selection of sports. But, what's equally exciting is the challenge of developing the 'surface on a surface' system."

"We have been involved in the new practice facility at Firwood Bootle Cricket Club in Liverpool, which combines a special permanent surface in the clubhouse extension for functions and events, which is then covered with our portable rollout cricket mats for batting and bowling practice. This dual-use system is working very well and has enabled the club to start training much earlier in the season."

Continuous improvement is not something new to those in synthetic sports surfacing, which is now in its fifth decade of development. During the 1960s, the Ford Foundation in America was studying ways to improve the physical fitness of young people, while at the same time, the Chemstrand Company, a subsidiary of Monsanto Industries, was developing new synthetic fibres for use as super-resilient carpeting.

The company was encouraged to try to make the perfect urban sports surface for schools and, in 1964, its synthetic turf - called Chemgrass - was installed for the first time at the Moses Brown School in Providence Rhode Island.

A year later, Judge Roy Hofheinz built the AstroDome in Houston and, in 1966, the Houston Astros' baseball season began on a Chemgrass surface, now renamed Astroturf.

The doors in professional sport had well and truly been opened to artificial turf and, the next year, Indiana State University Stadium became the first outdoor stadium in the world to be installed with Astroturf.

Europe took time to catch up, with London leading the way, when Islington council installed first generation synthetic football and hockey pitches as part of the regeneration of the Caledonian Market area in North London.

Europe's early 'plastic pitches' were made from polypropylene, which was cheaper and softer than the nylon version, so players were at less risk of injury but, before long, second generation technology had evolved, with longer tufts of grass spaced more widely apart, and sand spread between the fibres to create firmness and stability.

Because polypropylene does not return to its original shape once it folds, the sand infill, used to support the fibre in an upright position, was critical, as was regular brushing and topping up of sand to maintain an upright pile.

As a result, organisations which saw the introduction of 'maintenance-free' artificial turf as a way to cut costs soon saw pitch quality deteriorate. Surfaces felt firmer under foot, played faster, retained surface water and developed bumps and hollows, clearly indicating that synthetic surfaces required maintenance, rather than being maintenance-free. 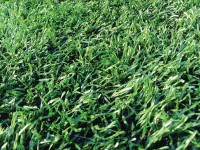 Twenty years on from that, and the latest 3G synthetic turf has certainly come a long way. The grass has longer fibres (50mm or so) which are made from softer materials like polyethylene, spaced further apart in the carpet and generally infilled with rubber granules or crumb.

These are now regarded as a genuine alternative to natural grass, although regular brushing is still required to avoid compacting and to stop the infill material from migrating away from high-intensity play areas such as goalmouths.

"As long ago as the late 1970s, Nottinghamshire County Council had seen a lack of traditional groundsmanship skills" said Andy, "and researched and developed its own range of synthetic cricket pitches which it could install at any site within the county boundaries. By 1984 we were marketing and distributing the council's patented designs, alongside our own systems.

"In the grand scheme of things, artificial turf is still a relatively new invention, but it continues to develop and it is certainly here to stay."
If ever proof of that were needed, in July of this year, officials at Cowboys Stadium - the new $1.15bn home of the Dallas Cowboys - announced the introduction of three artificial pitches at the venue.

"Always in the back of our mind, we knew there would be a lot more here than just football or soccer. We built it with the ultimate flexibility in mind," Cowboys Stadium General Manager, Jack Hill, told Associated Press. "Nothing against natural grass. It's beautiful. But, from a maintenance standpoint, there's quite a bit to it."