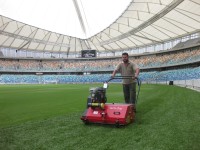 The World Cup is being played in ten stadiums. Two of them have a strip of artificial turf installed around the playing field containing natural turf, where traffic will be concentrated outside the match area. These are the Moses Mabhida stadium in Durban and the Nelson Mandela Bay stadium in Port Elizabeth*, both being ultra modern and brand new stadiums.

The rubber filled synthetic turf strip in Durban is between 3-7 meters wide, and 3 machines for its maintenance have been purchased. A tractor pulled Verti-Top 1500 and a selfpropelled Verti-TopWB are being used to clean the turf and the rubber Infill from litter and dust. Its rotary brush removes surface litter and the rubber Infill, filters the debris out, and then redistributes the cleaned rubber particles evenly over the surface.

The Verti-Broom machine has a triangular arrangement of brushes, and is being used to straighten and groom the fibres, and to redistribute and decompact the rubber Infill material. It is being used at both stadiums in Durban and Port Elizabeth.