by Lucy Nicholls
in Football, Machinery & Mechanics, and Battery/Electric Power
on 23 Aug 2021

After a stringent search for a new rotary mower, Ian Lucas, Head of Grounds at A.F.C Bournemouth, concluded that the electric Dennis ES-34R was the by far the best choice. 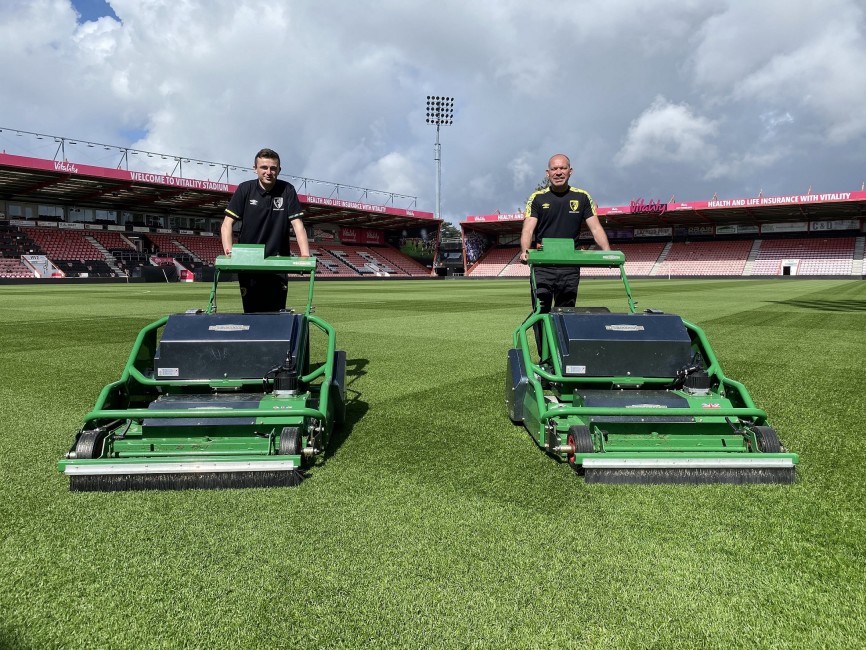 Ian has been the Head of Grounds at A.F.C Bournemouth for the past three and a half years and has developed a glowing reputation in many sectors of the grounds management industry. However, it could well have been a quite different story.

Having excelled in art at school he originally set out to be a graphic designer by trade. However, after struggling to land a relevant position, Ian started working at his local golf course. This was not just on a whim because he had previously maintained a local football pitch, but what makes this even more remarkable is that he offered to work at the golf club for free for the first two months. His quality standard of work was quickly recognised, and he was rewarded with a full-time position - which he occupied for three years.

He then continued to hone his new craft by going on to work at another golf course, Southampton F.C. and an independent school before being appointed Head of Grounds at A.F.C Bournemouth.

Ian may not have ended up following his original career path but those in the know will confirm that he is still an artist in his own right. One look at his work will tell you that he has an incredible eye for detail and that extends to every aspect of his job, including the purchasing of new equipment.

He certainly left no stone unturned when it came to looking for new rotary mowers.

"We had demonstrations carried out for every single electric and petrol rotary mower you can think of," he said.

"With our previous rotary mowers, we had got to the point where they needed either replacing or repairing. It was quite common to get maintenance issues every two years with them and we wanted something that would last us longer."

"The club is looking at taking a greener approach, so we decided to narrow our search down to the electric rotaries. We spent a lot of time with all the various electric rotary mowers to make sure we made the right decision. We looked at the design, build quality, battery life and the cut and collection. The performance when the grass is dewy or luscious was important for us because we cut nearly every other day on grass that is likely to be damp and I didn't want issues with the chute clogging up."

"It was the new Dennis ES-34R which ticked these boxes and proved to be the best overall."

Ian revealed that the club purchased two Dennis ES-34R's and he explained how they are now playing an integral part in his maintenance programme at both the Vitality Stadium and the training ground.

"We'll use them straight after a game to hoover up the debris and the beauty is that, because of the size of the ES-34R's, we now have two people doing this rather than four. This frees up the other two members of staff to do other jobs such as divoting. During the week we may well use them twice more on the stadium pitch before switching to the Dennis G860 cylinder mowers for matchday preparation."

"The battery life is unbelievable on the ES-34R's," Ian continued. "One mower will do a whole pitch and you can still have at least 40% battery life left. Other mowers we trialled just couldn't compete in this respect."

The Dennis ES-34R is also fitted with a weatherproof colour LCD programmable display and keypad which operates the machine and will feed back information to the operator including ground speed, battery charge level, instructions and much more. This can easily be updated and customised to suit individual customer requirements - something which also continues to impress Ian.

"I love the computer side of it," he said. "Most of the time we run it on the maximum revolution of the blade to get the maximum suction but sometimes we drop to half that and drop our speed levels for areas that we have recently seeded. This is important in areas such as goal mouths because we are constantly seeding there. By dropping the speed and power levels it means we can still cut those areas without hoovering the seed up. This of course was not possible with our old rotaries, so it has made a real difference."

"I also like how (through the LCD display) you can see how far the mower has travelled and how many hours it has been in operation."

"Another good feature is that you can pre-set the turning speed so when you get to the end of the pitch, you can simply press the button and it will automatically drop your speed, so you have more time to turn. This is great because you no longer have to rush or turn the mower off and back on again."

"These two Dennis ES-34R's have certainly saved us a good amount of time and I would also confidently say that so far they have helped us to be more efficient."