HOMEOWNERS across Wales who allow invasive plants such as Japanese Knotweed to spread unchecked face a hefty fine and an ASBO. 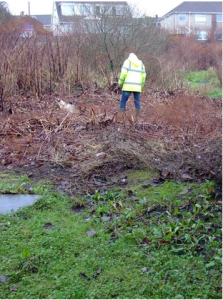 Homeowners could be fined up to £2,500 under the new rules of The Anti-Social Behaviour Crime & Policing Act 2014, which now classes failing to control highly invasive plants as 'anti-social behaviour.' The fines for businesses can be as high as £20,000.

Swansea has long been regarded as a hotspot for Japanese Knotweed, and some mortgage providers have been reluctant to lend to properties affected by the plant.

Instead of an expected £80,000 for the property, the presence of knotweed on an adjacent piece of land had seen it valued at £45,000.

After reading about her plight in the Evening Post, knotweed removal specialists Environet came forward to offer their services, and have successfully been helping to remove the knotweed from the site.

And although she is now hopeful she will be able to shortly put the house on the market somewhere near the original market value, she issued a warning over the new guidelines.

Mrs Wakeman said: "We are well on the way with the eradication programme, and hope to be able to put it on the market shortly.

"But there is already legislation anyway to deal with it.

"You have to be very careful with identifying where it comes from. If my aunt had been told she was responsible because it was on her land, it would have been very distressing for her, and I think there are other neighbours in the same position.

"Good people will take responsibility for it, but it has to be very, very clear where it started from."