0 Ash Dieback: a case of ashes to ashes?

The UK's trees seem, at present, to be under constant threat from new pest and disease problems. Leaf-mining moth and bleeding canker disease of horse chestnut, oak processionary moth, Asian longhorn beetle, acute oak decline, sweet chestnut blight and Phytophthora ramorum are just a few examples. Yet, the latest disease to hit the headlines may well prove to be one of the most devastating - ash dieback.

What causes ash dieback and where did it come from?

Ash dieback is caused by a fungus called Chalara fraxinea. You may also see the name Hymenoscyphus pseudoalbidus in some of the literature on the disease - this refers to a different stage in the life-cycle of the same fungus.

If you have been watching the news reports about the disease, you may have got the impression that it has been discovered only recently and, as far as cases in the UK are concerned, this is true. However, it was actually first reported (in Poland) in 1992, although it took some time before Chalara fraxinea was confirmed as the cause of the disease.

The problem spread rapidly across mainland Europe in the 2000s, and many countries are now affected. Denmark is the country mentioned most, often due to the severity of the problem there (up to 90% of ash trees affected), but ash dieback is also present in France, Germany, Italy, Belgium, the Netherlands and several other countries. There are, at present, no records outside of Europe.

The first cases of the disease in the UK were found in early 2012. Ash plants infected with C. fraxinea were imported from the Netherlands by a nursery in southern England, and then sold throughout the UK. Action to trace and destroy the affected batches of plants was still ongoing when there was a further, even more serious development. 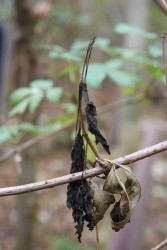 In October and November, the first cases were found in the natural environment, and these couldn't be linked to the arrival of the fungus on new planting material. Since these cases were all in eastern counties (notably East Anglia, Essex and Kent), it is suspected that the fungus may have arrived at the sites by wind-blown spores from the continent.

What are the symptoms?

C. fraxinea is confined to ash trees, with common ash (Fraxinus excelsior) and narrow-leaved ash (F. angustifolia) appearing to be most susceptible. Rowan or mountain ash (Sorbus aucuparia), the leaves of which can look similar to those of ash trees, is not affected.

Infection usually starts in the leaves, which develop dark blotches, often beginning at the base of leaflets or around the central vein. Affected leaves eventually turn black and wilt. The fungus then spreads from the leaves into the twigs, and from the twigs into the branches and main stems. Lesions on the bark are brown in colour, sometimes with associated bark cracking. When the infection spreads into a large branch, or stem from a twig, it often causes a diamond-shaped lesion, although this will become more irregular in shape as it enlarges. Below the affected bark the wood is discoloured brown. 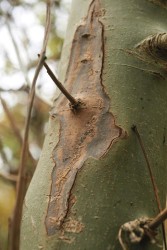 As the infection progresses, twig and branch dieback develops. The tree may respond by producing lots of new shoots directly from the branches and/or trunk (these are known as epicormic shoots). Young trees can be killed within a year or two, but older, mature trees may take several years to succumb.

How does C. fraxinea spread?

The fungus releases infectious airborne spores from small, mushroom-like structures that develop on fallen, decaying leaves shed the previous year - these spores infect the current crop of leaves during wet weather. It is thought that the spores are only released from June to October, so there is currently a period of grace where new infections should not be occurring. Indications are that the wind-blown spores can easily spread the disease over a distance of about 20-30km per year, although they may sometimes be dispersed much further. Long-distance spread of the disease can also occur very easily through the movement of infected plants in the nursery and forestry trades, which is why import restrictions have been imposed.

What action is being taken?

The severity of the threat posed by ash dieback led to a meeting of the Government's Cobra committee, which is convened in response to periods of national crisis. All imports of ash plants and seeds (the fungus can also be seed-borne) have now been banned. There has been much talk of stable doors and bolting horses, given that the problem had been known in Europe for several years 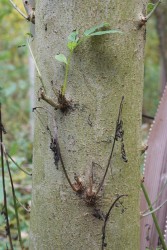 before this action was taken. Unfortunately, there was some initial confusion over the identity of the fungus, until DNA-based molecular techniques confirmed that C. fraxinea was, indeed, a new pathogen to the UK (a very closely-related fungus, which looks virtually identical, is common on dead ash leaves in the UK, but is a saprophyte and does not cause disease).

Where C. fraxinea is found on recently planted ash, or on plants at nurseries or garden centres, statutory Plant Health Notices are issued requiring the plants to be destroyed (by burning or deep burial). Unfortunately, under the Plant Health Order there is no compensation paid to the owners of the plants. In certain cases, steps may be taken to contain the problem on site. Where ash dieback affects established woodland or hedgerows, movement restrictions and biosecurity measures are imposed. The most effective course of action for this type of outbreak is being considered (as mentioned previously, new infections should not occur during the winter, giving a limited time period for a detailed risk assessment and the formulation of an action plan). However, it is highly unlikely that the disease will be eradicated.

What does the future hold?

Unfortunately, our climate is very suitable for the spread of ash dieback, so it is likely that a large percentage of our ash trees will become infected over the coming years. Fraxinus excelsior is the third most common native broadleaved tree in Great Britain (around 80 million trees, or 130,000 hectares of predominantly ash woodland), so the results of the disease will be there for all to see. Of course, in cases like this, there will be much research undertaken into ways of controlling or overcoming the problem - this has already been happening in mainland Europe where the disease has been present for longer. Quarantine measures, sanitation (e.g. treatment of equipment with disinfectants) and the use of fungicides may all have a role to play.

The best hope, however, is probably the genetic variation which exists within the ash tree itself. Dutch elm disease was so devastating in the seventies because elm trees spread vegetatively by suckers, so large numbers of trees were genetically identical (clonal) and equally susceptible to the disease. Ash trees have much greater genetic variation, and a small percentage of trees in areas devastated by ash dieback currently remain healthy. It is hoped that the progeny of these trees can eventually be used to replace those killed by the disease.

What can you do?

Everyone with ash trees in their care should familiarise themselves with the symptoms of ash dieback (in addition to the photographs accompanying this article, there are many good pictures and videos on websites such as that of the Forestry Commission: http://www.forestry.gov.uk/chalara). The photographs shown on the television news have been somewhat confusing, in some cases not being those of ash dieback at all - for example, the BBC news repeatedly showed a picture of patches of lichen on healthy tree bark!

If visiting an affected site, you should follow the biosecurity advice given on signs, to avoid spreading the disease on shoes, bicycle wheels, etc.

If you suspect that you may have found a tree affected by C. fraxinea, you should contact the following:

Owners of smartphones can download an app called Ashtag that can be used to submit photos and locations of suspected cases.

The close-up images used in this article have been kindly supplied by the Food and Environment Research Agency (Fera). General images are from Wikimedia Commons