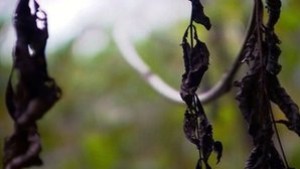 The first three cases of ash dieback in 2013 have been found in Wales, the Forestry Commission has confirmed.

The fungus, which causes trees to gradually wither and die, has been found at three newly-planted sites in private woodland in Pembrokeshire and Ceredigion.

All the young trees on the three sites have been destroyed as a precautionary measure to try to contain the disease.

Ash dieback has now been identified at 16 sites across Wales.

This is the first time the fungus chalara fraxinea has been found in Pembrokeshire and Ceredigion.

Chalara does not pose a risk to human or animal health.
Government guidelines state there is no need to restrict public access to woodlands.
The main source of spread is from the transport of infected ash plant parts.
When visiting the countryside people are asked not to move ash trees and leaves.
Steps should also be taken to try to remove mud from boots, clothes, bicycles, baby buggies, dogs, vehicles.

A spokesperson for Forestry Commission Wales said it was important to point out that no cases have been found in the natural environment in Wales.

Chalara dieback of ash, caused by the fungus chalara fraxinea, was identified at the new Welsh sites during a "trace forward" inspection of young trees sourced from known infected nurseries.

Forestry Commission Wales staff are checking all known recent ash plantings to establish the full extent of the outbreak, which has yet to be discovered beyond new planting sites in Wales.

John Browne, of Forestry Commission Wales, said: "While these newly confirmed infections have extended the known distribution of this disease in Wales, there is still no evidence that chalara is present in the wider environment here."

The disease was first recorded in Britain in early 2012 in Leicestershire and is known to have spread to the wider environment in the south-east of England from spores which are believed to have been blown across the English Channel and North Sea.

Forestry Commission Wales staff are liaising with the owners of infected trees and have written to landowners offering guidance and urging them to take simple precautions to protect ash trees close to infected new plantings.

See the rest of the article on the following link BBC