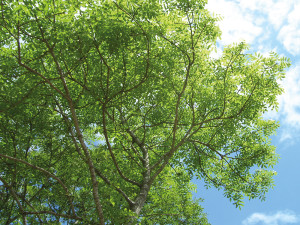 The ash tree is likely to be wiped out in Europe, according to a review of the evidence. The trees are being killed off by the fungal disease ash-dieback along with an invasive beetle called the emerald ash borer.

According to the research, published in the Journal of Ecology, the British countryside will never look the same again. The paper says that the ash will most likely be 'eliminated' in Europe, and this could mirror the way Dutch elm disease largely wiped out the elm in the 1980s.

How to spot ash dieback

Ash trees are a key part of the treescape of Britain. You don't have to go to the countryside to see them. In and around towns and cities there are 2.2 million. In woodland, only the oak is more common.

However, according to a review led by Dr Peter Thomas of Keele University and published in the Journal of Ecology, "between the fungal disease ash dieback and a bright green beetle called the emerald ash borer, it is likely that almost all ash trees in Europe will be wiped out - just as the elm was largely eliminated by Dutch elm disease". 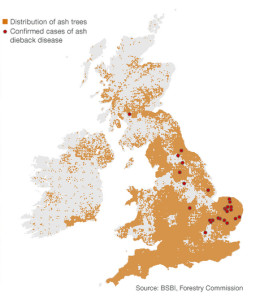 lso known as Chalara, is a disease that was first seen in Eastern Europe in 1992. It now affects more than 2 million sq km, from Scandinavia to Italy.

It was identified in England in 2012 in a consignment of imported infected trees. It has since spread from Norfolk and Suffolk to South Wales. Caused by the fungus Hymenoscyphus fraxineus, it kills the leaves, then the branches, trunk and eventually the whole tree. It has the potential to destroy 95% of ash trees in the UK.

The emerald ash borer is a bright green beetle that, like ash dieback, is native to Asia. It's not yet in the UK but is spreading west from Moscow at a rate of 25 miles (41 km) a year and is thought to have reached Sweden.

The adult beetles feed on ash trees and cause little damage. However the larvae bore under the bark and in to the wood, killing the tree.

According to Dr Thomas: "Our European ash is very susceptible to the beetle. It is only a matter of time before it spreads across the rest of Europe - including Britain - and the beetle is set to become the biggest threat faced by ash in Europe, potentially far more serious than ash dieback."

This won't just change our landscape - it will have a severe impact on biodiversity. 1,000 species are associated with ash or ash woodland, including 12 types of bird, 55 mammals and 239 invertebrates. 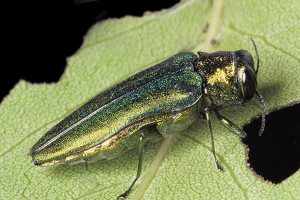 Mr Thomas said, "Of these, over 100 species of lichens, fungi and insects are dependent upon the ash tree and are likely to decline or become extinct if the ash was gone."

"Some other trees such as alder, small-leaved lime and rowan can provide homes for some of these species... but if the ash went, the British countryside would never look the same again."

One small hope is that some cloned ash trees have shown resistance against the fungus. But that won't protect them against the beetle.