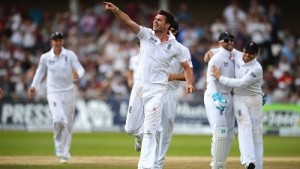 England coach Trevor Bayliss has called on groundsmen to stop preparing pitches that play into the "Australians' hands."
Both Bayliss and Alastair Cook denied they had asked for a slow pitch at Lord's to help nullify the danger posed by Mitchell Johnson and the coach claimed England have no control over what surfaces are produced by groundsmen.

The pitch in Cardiff was slow but at least characteristic of the ground. At Lord's the the surface was far slower than the one prepared earlier in the summer for the New Zealand Test. Bayliss believes Australia's extra pace means they can summon up the power to take wickets on lifeless pitches whereas Stuart Broad and James Anderson need a little assistance off the seam to be at their most effective.

"We've got no control over what the wickets are like, but certainly a flat wicket plays into the Australians' hands," said Bayliss.
"I think if the wicket has got a bit of seam in it … we want to win this series and for anyone to win a series you have to take 20 wickets per match. I think a flat wicket suits not only their batters but also the bowling attack they've got more than it does ours. So I'd like to see a wicket with more in it. That might make it more difficult for us to bat on it, but if we're able to take 20 wickets even if they take 20 wickets we still have a chance of winning."

After the match on Sunday Cook admitted Australia were on top from "ball one" and Bayliss sensed something was not quite right with his team's mental approach.

"It's a big turnaround isn't it, from the first to the second. We knew Australia would come back hard at us and maybe we didn't concentrate on what we were doing like we did in Cardiff," he said. "In Cardiff we were very focused on what our jobs were individually, maybe we spent a little bit too much time thinking about how hard Australia would come back. So I think going forward to the next game that we get back into that mode and just worry about what we're doing."

Bayliss will meet with fellow selectors - James Whitaker, Angus Fraser and Mick Newell - tomorrow and looks set to make changes after his the first two Tests of the series. Gary Ballance looks most likely to be dropped but Ian Bell and Adam Lyth will be nervous too with Bayliss now having seen his players at first hand.

"I suppose that's always a concern," he said of recent top order collapses. "Every innings we've been 4-30 or 4-40 and in the first innings to get to 300 from where we were they showed some good character. So they've certainly got it in them. It's [changes] on the mind of anyone when the team is not playing like you would like, those things are always in the back of the coach's and selectors' minds.

"But what you've also got to do is give the players that are in there as much confidence as possible as well. They are obviously good players and the reason they are in the team is because they are thought of as the best players in England at the moment. There are some good players on the outside and we've got a selection meeting, I'm not going to speculate on what exactly will happen until Tuesday."