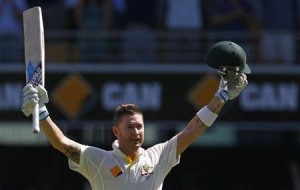 MELBOURNE (Reuters) - Resurgent Australia had enigmatic paceman Mitchell Johnson to thank for their crushing win over England in Brisbane and will put their hopes on another unknown quantity when the coin is tossed for the second Ashes test in Adelaide.

Adelaide Oval's new drop-in pitch is only expected to enhance the ground's reputation as a batsman's paradise, and Australia captain Michael Clarke will be keen to win the right to bat first ahead of counterpart Alastair Cook.

The pitch has drawn criticism for producing two run-heavy draws in the domestic Sheffield Shield, and groundsman Damian Hough has been at pains to spice it up while leaving something for the spinners late in the match.

"We think it's pretty close to what we have had in previous years," he told reporters on Tuesday.

"It might be a little bit slower this year, being brand new."

Australia carry all the momentum into an Adelaide Oval in the midst of a A$535 million ($487 million) re-development after their fired-up attack dismissed England cheaply in both innings to seal victory within four days at the Gabba.

England, however, have fond memories of their last match at the picturesque ground, having pounded Australia by an innings and 71 runs in 2010, a rousing victory that helped set up their first Ashes win Down Under in a quarter of a century.

Fired by a sparkling first-innings 227 from the inimitable Kevin Pietersen and 148 from Cook, England put 620 on the board before Graeme Swann sealed the win with a five-wicket haul in Australia's second innings.

While the drop-in pitch will be docile in comparison to the bouncy Gabba wicket, it is expected to provide something for Swann and his opposite number Nathan Lyon, who both come into the match wth a point to prove.

Swann was roughed up by Australia opener David Warner and captain Clarke in Brisbane and emerged with figures of 2-215.

Lyon, a former groundsman at Adelaide Oval, enjoyed a far better test than Swann, taking key wickets in both innings, but question marks remain over the 26-year-old's ability to close out victories.

Lyon missed a chance to silence the doubters against South Africa in Adelaide last year, but managed only one wicket on the fifth and final day as the Proteas salvaged a fighting draw with only two wickets left at the close of play.

"Fingers crossed there's a little bit more spin down there and we'll see how we go," Lyon said on Friday.

In contrast to the assured unit that arrived in Adelaide three years ago after dominating the latter half of the series-opening draw in Brisbane, England have had their confidence rocked by the departure of number three batsman Jonathan Trott due to a stress-related illness.