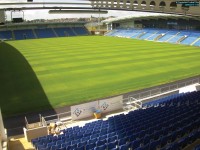 "We'd been looking to relocate for the last ten years, if not longer" says Stadium Director, Philip Taylor. "A new local plan for the town included a 22 acre regeneration area beside the A61 by-pass which had formally housed the old Dema Glass works. Part of this area was allocated for the club, with the remaining area going for retail and mixed use. Tesco, who needed bigger premises, took up ten acres and, with the planning gain on the land, the move became financially viable. The outcome has worked in everybody's favour."

Philip maintains that Chesterfield FC has always had strong links with the community, and the new state of the art stadium will give the club the opportunity to provide extensive first class facilities for all. "The East stand will house a soft play area for the kids, a cafeteria and toilet and changing facilities, including those for the disabled," he continues. "I think that, at the moment, we're the only sports club in Derbyshire to do this." An infinity swimming pool, gymnasium and education suites are in the pipeline for the future with, possibly, a community police station and a wide range of facilities for other community groups.
Meanwhile, in footballing terms, everything hinges on the new pitch and the performance and quality of the football. J Pugh-Lewis was given the pitch construction contract, having maintained the old Saltergate ground for the last fifteen years. Director James Pugh-Lewis, had been involved with the architects and designers for two years before the company arrived on site on the 1st March. "Originally, the start was delayed due to bad weather," recalls Tim Pugh-Lewis who has overseen the whole project, "but we got going in the beginning of April and were seeding by 13th May."

"The construction is a standard suspended water table pitch with, essentially, 100mm twinwall pipe drains at 5m centres, geotextile, 150mm depth gravel carpet and then 150mm depth of lower rootzone sand and 150mm depth upper rootzone, the top 100mm of this being Fibresand reinforced," Tim explains. A fully automated irrigation system has been installed, and the pitch is graded into a 'flat pyramid' profile with the centre spot 300mm higher than the perimeter of the pitch. "The pitch is a similar specification to the one we installed at Birmingham City's St Andrews Stadium last year, and will make it one of the best pitches in the league," Tim continues. 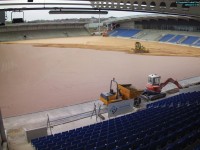 t's a very good pitch," Philip Taylor confirms. "Because of the adverse weather at the start, we were a week or two behind and people kept asking me if it would be ready in time. James Pugh-Lewis reassured us that it would and the company made up the time. The grass was growing one week after seeding and we knew we'd be ready for our first fixture, a friendly with Derby County on 24th. July."

Philip thinks that the new facilities usher in a new era for Chesterfield FC, and the way the season tickets were selling by the end of May - already up on the previous year - was a very positive sign. "Hopefully, this season will see an increase in gate numbers and automatic promotion for the club," he says. "We've now got car parking for over 350 cars, whereas, before, people had to park either in the town or the local school, and we're hoping to become the premier banqueting and conference centre in the region. The new stadium stands to re-generate the whole area and provide so much more for both football supporters and the local community."