0 Astbury Hall Head Greenkeeper, Sean Jarvis, is rocking all over the course! 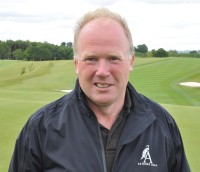 "Establishing any ground with just one type of cultivar is a mistake - you've got all your eggs in one basket. It makes diseases like take-all a greater risk"

Attention to the detail, research, and experience, together with close working relationships with his suppliers, are ensuring that Sean Jarvis is maintaining some excellent playing conditions at Astbury Hall Golf Club in Shropshire.

Sean's career first began in farming, before he was taken on as a greenkeeper at East Sussex National Golf Course in 1995. Within two years, he was appointed deputy head greenkeeper. From there, he moved to Bournemouth's Open Golf Centres setting up new courses, and then to Leicester where he managed the establishment of a new 9-hole golf course.

KK has loved golf ever since his band had challenged rock band Def Leppard to a tennis competition whilst on a tour. Def Leppard returned the challenge in the form of a game of golf. Ever since then, KK has been hooked on the game. He bought the Astbury Hall site and set about landscaping and refurbishing the Hall, with plans to establish a top quality elite golf course.

In 2004, Sean's experiences of 'growing in' new golf courses were to prove invaluable when he took on the role of Course Manager at Astbury Hall. The first 9-holes of a course had been sown the previous summer, and someone with an appreciation of maintenance and care of new grounds was needed.

KK had designed the course, influenced by his experiences of playing golf around the world, especially in America. Many ideas have been brought back and put into play at Astbury, for instance the design of the greens and some of the landscaping.

The greens had been seeded with MM10 - a combination of chewings fescue, slender creeping red fescue and browntop bent. Sean overseeded with the same mixture but also added some creeping bent grass.

"At the East Sussex course, we had used a mono-stand of American creeping bent grasses, and I still believe that species is the best choice for greens," explains Sean. "But, establishing any ground with just one type of cultivar is a mistake - you've got all your eggs in one basket. It makes diseases like take-all a greater risk."
Sean believes having a close working relationship with his suppliers is important. It was certainly beneficial in January 2005 when Matt Gresty of seed breeder, Limagrain, invited Sean to the STRI trial plots at Bingley, to evaluate the latest ryegrass cultivars on-trial. Sean says: "The winter was a good time to make the visit. Any grass will perform in the summer, but the question is, will it perform in the winter? After all, golf is a 52 weeks of the year sport."

Amongst the grasses that were performing well in the cold weather at the STRI, were Sefton, a browntop bent, and Moccasin, a slender creeping red fescue.

By now, the 9-hole golf course was growing in well. Both Sean and KK agreed it could be improved further, but it was not a priority. Instead, the second half of the course at Astbury Hall was built in 2009, and the whole 18 hole course opened in September 2010 with just under a year's growth on some of the holes.

Putting a seed order in for nine holes is a big commitment. Sean went up and visited the STRI site again to decide which ryegrass cultivars to include in his grass mixture formulations, and selected the seed supplier accordingly. Limagrain and the MM range of grass mixtures was his choice.

Sean already had some experience of MM mixtures from his time at the Bournemouth golf centre, and decided he would like to tweak the mixtures at Astbury Hall to his own formulation. He was not convinced that browntop bent grass brought any benefit, although it is traditionally used on many courses, and was included in the MM mixture.

So, in consultation with Matt Gresty, Sean redesigned some of the golfing mixtures. For the tees, fairways and the semi-rough, a 60% ryegrass: 40% fescue variation of MM22 was sown, with the browntop bent grass removed. The ryegrass cultivars it contained were Malibu, Melbourne and Pontiac, and the slender creeping red fescue used was Moccasin.

A custom mixture was also designed for the deep roughs. Sean explains: "We needed to have some long grasses, with some colour, to make the areas look attractive, and for ease of maintenance - so we need only cut them once a year. So, Matt and I devised a mixture which included Crested Dogs Tail which creates a purple haze, along with brown fescue grasses." 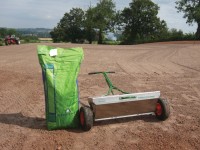 Last year, seeding was only finished in late October, and a cold winter followed. The MM mixtures are all treated with the seaweed extract, Headstart, to help promote germination and establishment.

This year, Sean overseeded the course with a straight ryegrass mixture consisting of cultivars: Pontiac, Melbourne and Malibu. He says: "Players want dark green grass, like they see at home on the television, and ryegrasses are greener than fescues. Also, as the number of people using the course has increased, the ryegrass makes a better repair job and has better wear tolerance than fescues. These days, many of the ryegrasses are getting to be as fine as fescues. So why use a fescue? Just use ryegrass. Also, fescues can take about ten days to germinate, but ryegrasses take only about five."

Fortunately, the grass varieties used at Astbury Hall have good disease resistance. Sean adds: "When the snow finally melted earlier this year, we found there was no disease in the sward. In fact, we hardly ever get any disease or need to spray fungicide. This is quite a bonus when a typical systemic fungicide programme can cost around £800 per hectare per application."

The greens are micro-managed by Sean and his team of greenkeepers, which numbers ten during the summer months. The greens are topdressed on a weekly basis, rather than the four or five times a year strategy which is typical of most clubs. "It's only a light dressing, but little and often will help the ball to run smoothly all through the year and aid thatch management," explains Sean.

Sean formulates his own foliar feed; it is predominantly made up of organic products, including a seaweed extract, for instance. The frequency and amount applied depends on how much grass has been mown off.

The original greens were sown with MM10 + creeping bent grass, and Sean thought the creeping bent grass may become dominant within the sward. However, despite some greens being several years old now, they still contain the same proportions of the three grass types.

Sean says: "Creeping bent grass warms up and is dominant from June and gives a quality sward. On the other hand, the MM10 and colonial bents come into their own in the winter. So, the combination ensures we have all year round good performance on the greens."

Another feature of the high level of management at Astbury Hall is that both the greens and tees are hand cut with a pedestrian cylinder mower rather than a ride-on machine. "It's more expensive on the staffing costs," explains Sean, "but it does a better job."

The cutting heights in summer are generally 2.75mm on the greens rather than 4mm: "This makes the greens faster and more difficult. We aim to have a summer speed of at least 9 ½ feet on the stimpmeter."

"Other courses can cut greens short and can lose some of the grass, but the management here is such that quality is not lost."

The Astbury Hall site is now under the management of Troon Golf, a leading golf management company which includes top courses like Turnbury and The Grove in its portfolio.

The 18-hole course at Astbury Hall is recognised locally as being an attractive but very challenging one. Membership is limited to 350 to retain exclusivity and, at a time when many golf courses are reducing their fees, subscriptions have been increased. Sean adds: "Further investments in improving the course are ongoing. The aim is to be the premier golf destination in the West Midlands. There are a number of clubs whose names roll off the tongue when talking about quality; we want Astbury to be one of them."

Matt Gresty adds: "Sean's scientific approach to turf management and attention to detail is highly successful. The overall turf quality at Astbury Hall is superb. Together with its layout and features, it has every chance to achieve its ambition of becoming an elite course."