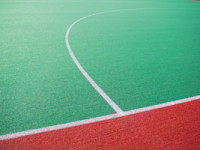 The introduction of synthetic surfaces has significantly changed the sport of hockey. Since being introduced in the 1970s, competitions in western countries are now, almost exclusively, played on artificial surfaces. This has increased the speed of the game considerably, and changed the shape of hockey sticks to allow for different techniques, such as reverse stick trapping and hitting. Tina Ribbans reports.

Hockey artificial turf differs from football and rugby artificial turf in the way that it does not try to reproduce a grass 'feel', being made of shorter fibres, although surfaces are now available which enable users to play both sports on the same surface. This shorter fibre structure allows the improvement in speed brought by earlier artificial turfs to be retained.

Hockey pitches are generally broken into three categories. Unfilled: Often called 'water-based', the pile is unfilled. The pitches require wetting, hence the name 'water-based', often via prolonged showering with a pitch-side water cannon prior to their use and, occasionally, during half-time intervals depending on the prevailing atmospherics.

They are favoured since they offer more protection for players by minimising the abrasive effect created by sand. These pitches form the majority of the elite level hockey pitches in use today. Sand-dressed: The pile of the carpet is filled to within 5-8 mm of the tips of the fibre with fine sand. The sand cannot be seen and can often be confused with unfilled pitches. Sand filled: The pile of the carpet is filled almost to the top with sand.

The sand makes the pitch rough and harder. In comparison to water-based pitches or minimal sand-dressed pitches, ball speed across the surface is often noticeably slower.

It is a false economy to scrimp on maintenance. Whilst you may save money in the short term by extending the maintenance intervals, or waiting until problems occur, an expensive recovery operation or, in some cases, a total renewal of the surface will be needed far sooner than if a maintenance programme is in place. 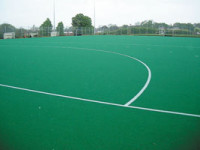 Although suppliers and installers of the surfaces differ in opinion over which system is best for their clients, there is at least agreement from all parties on the fundamental aspects involved in the maintenance of the surfaces once they have been fitted.

Any playing surface which contains an infill will, at some stage, suffer from migration of the infill away from the areas used most often. The intensity will obviously vary dependent on the usage and the particular system used but, rest assured, it will happen. Dirt and debris will accumulate on the playing surface, which may have been brought about by the wind and rain, the players footwear, or, if an indoor facility is being used, general dirt and dust from within the building. If left untreated, the surface will gradually deteriorate.

The sections that follow outline the key areas of attention.

Infill levels must be regularly monitored to ensure correct and even levels and distribution are maintained. It may be necessary to remove any excess infill or top-up the levels with suitable granular materials. Failure to do this will seriously impact on the viability and longevity of the facility.

Drag brushing of a synthetic surface remains a primary and fundamental maintenance operation. Specialist drag mats have been designed to help remove both surface debris and contamination and have become a valuable addition to the in-house maintenance remit. Ideally, drag mats should be used in conjunction with an appropriate drag brush.

Periodically, the seam/inlaid play lines across the surface should be checked for soundness and stability. This will ensure that any failures are highlighted at an early stage and repairs can be made before they worsen and increase the health and safety risk to any users of the facility.

Leaves and litter should be removed from the playing surface on a regular basis - ideally daily. If left on the surface, leaves will decay, causing staining and will decompose into the carpet to interfere with the draining characteristics of the facility. To avoid any unnecessary littering on and around the facility, it is also recommended that sufficient bins are provided and emptied on a regular basis. 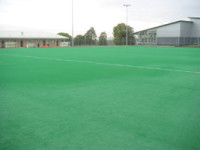 Appropriate signs should be erected advising users of the basic rules that need to be observed to ensure everyone can enjoy the facility in a safe environment.

Regular checks should be made to ensure the visibility of all of the painted play lines. Facilities carrying out weekly re-marks using water based paints should instead consider the use of two-part sports compounds specifically formulated for the sports environment.

The formation of moss, algae and weed growth is especially prevalent in water-based surfaces. Facilities should be especially vigilant in areas that receive little or no sunlight due to kickboards, overhanging trees or similar. Appropriate chemical treatments must be applied to the affected area wherever necessary. Once killed (darkened) the treated areas should be then brushed or spaded to remove the dead flora whilst taking care not to redistribute the spores to new areas. Water-based surfaces are likely to require a full specialist wash at least every 12 months.

As well as regular drag brushing and litter picking, the surface will benefit from a process called Power Sweeping which was developed by Technical Surfaces. This process lifts, cleans and re-grades the top few millimetres of infill in the part filled surfaces and extracts the debris and contamination from within the pile in water-based surfaces. Frequency should be determined by the other maintenance works being carried out as well as the age and condition of the carpet.

The absence of appropriate maintenance is a principle factor in the build up of silt and other contaminates on a carpet surface. An accrual of contamination from outside sources, combined with impurities in rainwater and material brought in by players and spectators contributes to the problems experienced. Winter Revival™ will allow for the removal of this material from the surface.

A Revite® of the surface should be considered on an annual basis to remove deeper-seated contamination from the infill of part-filled surfaces or that has migrated further into the carpet in water-based surfaces which comprise the facilities draining and playing characteristics. A Revite can take anything from one day to two weeks to complete depending on both the levels of contaminated material present in the pitch and the age of the facility. The process is at its most effective during the summer months when the natural status of the pitch will be dry.

Depending on the level of maintenance previously carried out, the constant accrual of contaminants in the infill will ultimately compromise the surface and affect drainage. At this stage, Rejeneration® will be the only solution. Using compressed air, it involves the removal of the top 12-14mm of the contaminated sand infill. Fresh replacement specialist aggregate is then imported leaving an almost 'as new' surface from which facilities can enjoy many more useful years of use.

Recent milder weather conditions have allowed for the establishment and continued proliferation of various mosses and algae.
High levels of vegetation within the carpet pile will impact very quickly on the general playing and draining characteristics of the surface. To help remove and prevent the growth of moss and algae, both on and within the carpet, it is recommended that the Hydro-Tech® process is carried out on an annual/bi-annual basis.

The safety inspection report allows facilities to compile a valuable record of the health and safety status of their synthetic pitch and can then be handed over to the maintenance contractor.

This article was written in conjunction with Technical Surfaces. For further information call 08702 400700 or visit www.technicalsurfaces.co.uk