0 ATHLETICS TRACK RESTORED TO 'AS NEW' CONDITION WITH AQUATRAX

ATHLETICS TRACK RESTORED TO 'AS NEW' CONDITION WITH AQUATRAX 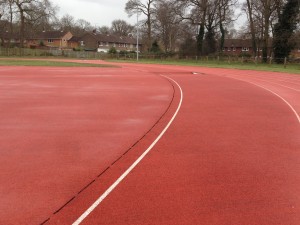 Investment in the maintenance of athletics tracks is as vital as the initial design and specification. Replay Maintenance, who are one of the most respected and longest established names within the synthetic surfaces' maintenance sector, has recently carried out their unique Aquatrax® process on the athletics track at Bracknell Leisure Centre in Berkshire, restoring the facility to an 'as new' condition.

The Replay Aquatrax® combines a low pressure washing but with a high volume, which loosens dirt and algae retained on or in the surface, with a unique vacuum extraction system which removes virtually all of the dirty water to a tank on the machine so that the contaminants held in the water are not returned to the surface.

The process was first developed to remove accumulated contamination during the maintenance of polymeric athletics tracks but has since been adapted to clean dirt and algal growth from unfilled or water-based hockey surfaces.

Because the Aquatrax® process physically removes contamination, unlike conventional pressure-washing which merely dislodges it, Aquatrax® provides a highly effective method of restoring the appearance, foot grip and free-draining characteristics of a surface.

"Following a recommendation from our annual track inspection that our facilities would benefit from a deep clean, we appointed Replay Maintenance to conduct a full clean" said Gareth Jones, Facility Manager at Bracknell Leisure Centre. 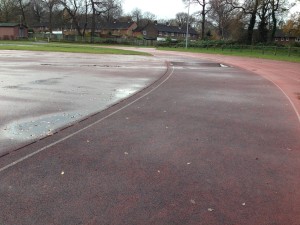 "Replay cleaned our six-lane 400metre track, plus long/triple jump/pole vault runways and the inner "D" at one end of the tack. The difference between the 'before' and 'after' was remarkable and highlighted to me just how much dirt, muck and general grime had been ground-in to the surface over the years.

"The compliments we have received from our resident athletics club since the track has been cleaned have also been very pleasing to hear and we wholeheartedly recommend the Replay Aquatrax® process to any facility that need to have their track cleaned," said Gareth.

"Athletic tracks should ideally be cleaned annually to ensure that the performance characteristics and appearance of the surface do not reduce over time," commented Nick Harris, Replay's Business Development Manager.

Outdoor sports surfaces are subject to pollution which is continually washed down by rain, blown by the wind, conveyed by birds and insects and then carried on to players' footwear. This gradually accumulates on or in the surface, detracting from the appearance and making markings difficult to see. Pollution also hinders the drainage of porous materials and may make the surface slippery, creating a Health & Safety risk and the possibility of claims from users.

Aquatrax® has now cleaned over 1.5 million square metres of tracks and water-based pitches and is the supplier of track cleaning services (Olympic Stadium) to the London 2012 Games.