As part of plans to make its new stadium among the most eco-friendly in the world, the Atlanta Falcons have unveiled plans to surround the venue with edible gardens 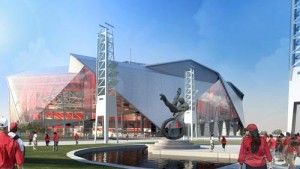 Apples, figs and berries are among the planned produce from the gardens, which will be irrigated by rainwater collected from a storm detention vault.

Created by Atlanta-based urban designers HGOR, the gardens will feature raised beds at the southwest corner of the stadium with a range of edibles also planted along Northside Drive.

The gardens will be located adjacent to the 61,000sq ft (5,600sq m) fan plaza, which will feature pre- and post-game entertainment, a 100-yard bar and a technology lounge offering access to game day media content.

The garden is part of the Falcons' plans to obtain the highest level of LEED certification from the US Green Buildings Council for the new stadium.

Recycled building materials are being used extensively in the development of the stadium and the stadium will also be operated as a zero waste facility - with Solar PV panels reducing energy usage.

It will feature an eight-petal retractable roof - a first for any stadium - and the world's largest 360 degree HD video screen viewable from everywhere inside the stadium.

With a capacity of 83,000 people, the venue will be the largest in the National Football League (NFL), surpassing the MetLife Stadium (82,500), home to the New York Giants and New York Jets.

Bill Johnson of 360 Architecture - acquired earlier this year by HOK Architecture - is lead architect for the stadium. Johnson says the circular opening in the roof was inspired by the Roman Pantheon and was designed to be made of a clear, lightweight polymer material that can adjust its opacity to control light.

For the full article, visit www.leisureweek.com.