Not many manufacturers can say their pedestrian mower was designed by a grounds professional as ATT uniquely can. Something that Leslie Cain, Head Greenkeeper at Luxembourg's Grand Ducal Golf Club, considered significant - himself unique in that he is also a Golf Pro! 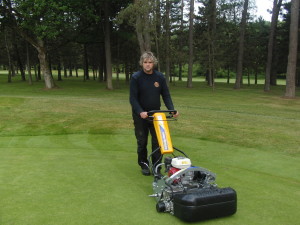 Grand Ducal is a private club of around 85 years old and certainly the oldest club in Luxembourg, comprising of an 18 hole course; 3 putting greens and a 6 hole pitch 'n' putt. Leslie's interest in greenkeeping was borne out of his playing a lot of clubs and wanting to know why some courses played really well and others were terrible. Leslie wanted to know more and studying greenkeeping has almost became a hobby.

He's been putting his studies into practice and over the last 5 years he and his team have been carrying out some greens renovation work to completely rebuild some of the greens.

Leslie and the team have switched over to hand mowing as the greens needed some TLC and hand-cutting would reduce the stress on the new plants.

Over the last few years, Leslie had been looking into alternatives to the old orange mowers they had. With demos from red ones and then green ones he didn't feel they were as good as people had made them out to be. He then remembered seeing the INFiNiSystem™ on The Grass Group's stand at BTME a few years ago.

After a demo day in Belgium he was hooked from the moment he saw the INFiNiSystem™. Leslie again, "It's so versatile in that you could change the cutting unit over to grooming or scarifying or other uses. You could just tell the INFiNiSystem™ was built by someone who knew what he was doing. The quality of the machine is fantastic and once it is all set up the quality of cut and the overall usability is fantastic. A green takes between 15 and 20 minutes to cut."

Leslie continues: "The ATT machine was designed by a Greenkeeper," he said, "rather than the other machines that are designed by engineers who have never professionally cut a green - and when you have problems, they never know how to help!"

The club purchased a 22" INFiNiSystem™ with a 11 blade SMARTCut cassette and a SMARTUltraGroomer cassette, powered by an engine generator as noise isn't an issue - had it been they would have gone for the battery model. More purchases are in the pipeline.