by Louise Prettyman
in Machinery & Mechanics
on 06 Nov 2015

Forest Green Rovers Football Club in Nailsworth, Gloucestershire, is unique in that it is the only club in the UK to have an organic pitch. They don't use chemicals, not even for the toilets, but use as many organic feeds as they can, making up their own organic cocktails. FGR's Chairman, Dale Vince, is the founder and current CEO of Ecotricity and became involved with FGR for part social and part environmental reasons. Those environmental reasons cover all aspects of the facility, including mowing the pitch. 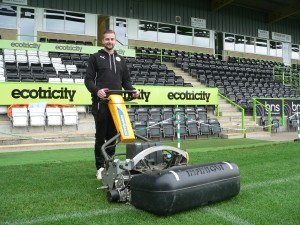 As a Club, Forest Green care very much for the environment and their remit is to create the world's first truly sustainable football club, something that enticed Head Groundsman, Matt Rainey, to re-join the club earlier this year. They recycle all water so that every drop of rain water that falls goes onto the pitch, through the drainage system, and comes back onto the pitch through the recycle pan. They also have solar panels to provide electricity and a wild flora conservation area at the front of the club.

One thing of prime importance was the issue of machinery noise and the sourcing of a battery powered mower. "I first saw the ATT 30" INFiNiSystem™ on Twitter," explained Matt, "and asked The Grass Group to give us a demo. The striping was excellent and the quality of cut fantastic. You can't fault it, it's a precision piece of kit, very quick but very easy to use. They left it with us for a week and a half and we were so impressed with it we decided to hire it until such time as we could sort out buying it!"

Sand based pitches, like that at Forest Green, tend to compact more and having the 30"INFiNiSystem™ weighing only 138kg, as opposed to other mowers which weigh upwards of 330kg, was a major factor in Matt's decision. They are looking forward to the mower making a massive impression on their winter maintenance regime. The ability to use differing cassettes is also of interest, especially the SMART Sarel roller.
Matt again, "Whilst the initial cost with the LiPo batteries is more than a comparable engine powered mower, the running costs are very much less. With the solar panel on the roof of the grandstand, it doesn't cost us anything to charge up the battery; but even if it did, the cost of electricity would be far less than petrol - so the equipment pays for itself over time."