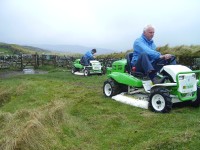 Attila the Hun at Hadrian's Wall? Sounds unlikely until you realise that the 'Attila' in question is Etesia's ride-on brushcutter.

Like its mighty warlord-namesake, this powerful machine ravages everything in its path! Tough undergrowth is reduced to mulch so it's not surprising that, new for this year at the historic Hadrian's Wall, two Attila brushcutters are now being used to maintain the National Trail that follows the line of this World Heritage Site.

Keeping these 60-odd miles of paths and walkways open and in good order all year around is no mean feat - it is a task which Hadrian's Wall Heritage Ltd has for a number of years placed in the capable hands of landscape contractors, Alan Gledson and Richard Thomas.

As Alan points out, "Much of the route is grass, scrub and rough turf. The terrain is often uneven or waterlogged and many parts of the higher land are not easy to reach. Until now we have used hand-held strimmers and a flail mower trailed behind a quad bike. Both had their disadvantages - strimming was time consuming and the flail didn't leave a very good finish - it was noisy too and cumbersome to transport." So the decision was made to look for new kit.

All problems were solved when local dealer, Terry Steele from Lloyds of Carlisle suggested they try Etesia's latest Attila AV98 ride-on brushcutter. Since purchasing two of these 98cm machines at the beginning of this season, Richard and Alan have used them non-stop and agree, "They are doing a cracking job in a smashing spot!" Not surprisingly, each year, thousands of tourists pack their rucksacks and walk or cycle along the Hadrian's Wall route to amaze at the incredible construction of what is one of the world's best preserved ancient monuments, and enjoy the wondrous countryside.

The lowland areas are basically fields grazed by sheep and cattle where a 2-metre wide path is kept open. "These are really simple - Attila takes them with the greatest of ease - the finish is great - far better than the flail. We can vary the height of the deck at an instant, cutting down to 50mm in some areas, which is good for walking. Most of the land is uneven so the floating deck means we can dip into a hollow and bring it up as we come up on to a rise." says Richard adding that unlike the flail, Attila's narrow width will go through the pedestrian gateways between fields, which means they can now cut longer stretches of grass and save time. With its 21hp Briggs & Stratton engine, Attila AV98 has a top working speed of 12km/h. Much laborious hand-strimming has been eliminated too, "Down the sides of farm tracks where there is dead vegetation, brambles and reeds Attila simply eats the stuff."

The trail is extensive with a wide variety of sites, so efficiency really matters. For this reason, both machines are transported by 4x4 vehicles with trailers which are quick and easy to unload. To reach the mountainous central section of the trail, the ride-on brushcutters then have to be driven through rugged terrain with dips, hollows and steep inclines to access the remote path 1100 feet up on the top of nowhere. "Instant hydrostatic drive means you can react quickly and get out of trouble if you have to.

The machine is easy-to-use, very manoeuvrable and the traction is superb." explains Alan, Descending towards Cumbria, the river banks are wet and full of reed - "it's great on these banks and the engine is brilliant. It doesn't falter at all, even in really tough stuff. It's certainly the quietest mowing machine we have ever experienced - so we can keep alert and hear what is happening around us and the noise doesn't annoy walkers. Unlike most machinery, we don't need ear muffs. Noise is tiring but with the Attila we can use it all day without getting worn out." Richard is keen to add, "Comfort matters. I am 6ft 3" so being able to adjust the seat is really important. It is sprung and very comfortable - in the past we have had ride-ons which tend to be rather uncomfortable."
For some distance the trail runs fairly close to Hadrian's Wall - here these two professionals are well aware of their responsibilities towards the ancient monument, originally built in AD122 to 'separate the Romans from the Barbarians'. "It is of great historic archeological interest so we are very careful not to damage the structure - being able to quickly lift and drop the Attila's cutting deck is a real benefit.

We have occasionally hit a stone which is lying free on the surface - the blades are so tough there is not a mark on them!" Grass cutting during the growing season from April to October is just part of the Contract which also includes mending fences and gates; repairing erosion scars and renewing turf. Alan and Richard aim to cover the entire 60-mile trail every month - and as for the Attila? "As a practical tool it's fantastic! We are chuffed with the new machines - so it is good news all round."