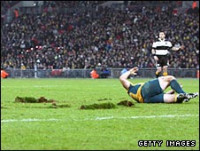 Australia's rugby authorities are launching an investigation into whether the Wembley pitch contributed to two Wallabies being injured last week.

Props Matt Dunning and Sekope Kepu both suffered long-term injuries when a scrum collapsed against the Barbarians.

Players' body Rupa and the Australian Rugby Union (ARU) have formed a health and safety committee to investigate.

"We're concerned from an occupational health and safety point of view that our members may be asked to play on surfaces that are unstable," added Dempsey, who was speaking to Australia's Sydney Daily Telegraph newspaper.

"The employers are the Australian Rugby Union and as such they have a duty of care to ensure safe playing surfaces for the players. It is something definitely worth exploring."

The matter will be investigated by a six-man committee made up of representatives from both Rupa - the Rugby Union Players' Association in Australia - and the ARU.

Dempsey added that the committee "was established to investigate players' safety and welfare and we're looking to see what recommendations can be given to deal with this issue".

Dunning could be out for up to nine months after surgery on his ruptured Achilles while Kepu's torn pectoral muscle means his chances of being fit for the 2009 Super 14 tournament are slim.

Australia beat the star-studded Barbarians 18-11 last Wednesday as the Wallabies ended their tour having won four of their six tour matches.