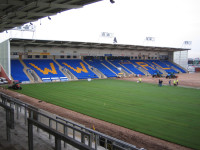 Visiting Brisbane Broncos fans have judged the turf on The Halliwell Jones Stadium pitch, (home to Warrington Warriors) the best in the country.

Laid by J. Mallinson, of Ormskirk Ltd. as the final part of pitch renovations which included re-surfacing, improving the top soil and installing a complete new drainage system, the 8,000 square metres of Lindum's Thick Turf went down during extremley wet weather conditions at the end of January. "We chose turf because of the time of year and the fact that the first home fixture was 18th February when Warrington Wolves were at home to The Bradford Bulls," explains John Mallinson. "Thick cut turf is about 40mms thick and carries a lot of growing medium giving it greater durability than conventional turf, and the large rolls - 1.1 metre wide - carry a considerable amount of weight. This means that there is less chance of it pitching up and being torn out during a game."

Melvin Jones, now in his 9th year as head Groundsman for the club is impressed by the speed of rooting. "In just under a month we had at least 2 inches of strong new roots," he says "and the pitch is performing better than we had thought possible." 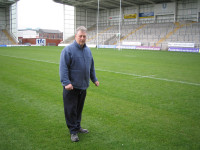 Lindum's M.D. Stephen Fell says that the company's Thick Turf, their L T sports mixture (a hard wearing sward that has been successfully employed on both Chelsea's training grounds and the parade ring and lawn areas at Ascot Race Course) is specially treated to root quickly. "We use a special feeding regime to ensure that the turf starts rooting as soon as it goes down," he says.

The Brisbane Broncos used The Halliwell Stadium for a training session ahead of their clash with St. Helens, in the Carnegie World Cup Challenge.

For further information on Lindum's Thick Turf, contact the company on Tel: 01904 448675 or visit their website at : www.turf.co.uk 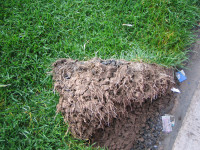