The Australian Open is now "weatherproof", after the installation of a third retractable roof at Melbourne Park, Tennis Australia says. 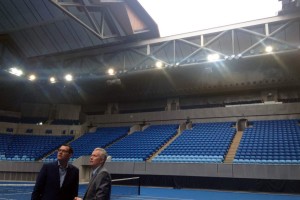 The retractable roof on the Margaret Court Arena will mean matches can continue even in extreme weather events, as were experienced in 2014 when a heatwave forced multiple matches to be postponed.

The 2015 Australian Open begins in Melbourne on January 11.

"There's no question that now having a third stadium with a retractable roof, that if we had to in the unlikely event, we'd be able to complete the tournament," Mr Tiley said. "Before it was not a possibility."

Mr Tiley said the roof could open and close in just five minutes, making it the fastest in the world.

"To be able to weatherproof this court so quickly enables us to have continuous play," Mr Tiley said. "Often you see in other stadiums, you've got to stop play before you can close the roof. That's not the case here."

"It means that this Melbourne Park precinct is the only grand slam venue in the world with three courts like this," Mr Andrews said. "The entire tournament, not that anyone would want this to be the case, but the entire tournament can be played between centre court, Hisense and of course, the Margaret Court Arena."

Mr Andrews said around 650,000-700,000 people were expected to attend the Australian Open this year.

Mr Tiley said the third roof would mean Hisense Arena would be available to 10,000 ground pass holders for the 2015 tournament.

In 2014, Australian Open organisers enacted the extreme heat policy early on day four of the tournament, on the third day of 40C degree-plus temperatures.

The world's best tennis players played in extreme heat, a ball kid collapsed, water bottles melted on the court and a grand slam-record-equalling nine players retired in the first round of singles matches, before the policy was enacted.

For the full story from ABC News click here.