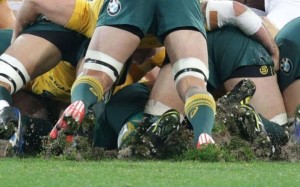 The turf cut up so badly during the second Test against England that huge divots appeared after each scrum, and safety concerns almost forced referee Craig Joubert to consider making them uncontested.

It was a constant problem during the Melbourne Rebels' Super Rugby campaign but stadium owners had repeatedly assured the ARU that enough of the surface had been relaid to ensure it would not cut up.

Bill Pulver, the ARU chief executive, said the state of the pitch was an embarrassment and that unless the stadium owners consider laying a pitch similar to the part synthetic one at Twickenham, they might consider moving their Test against Fiji, due to be staged there in 2017.

"We have expressed our extreme disappointment to the Melbourne and Olympic Trust (MOPT) following the Test at AAMI Park," said Pulver. "The playing surface was clearly not up to the standards required for international rugby.

"The issue with the stability of the turf during scrums has existed throughout the Super Rugby season and despite the work done... the end result was simply not good enough.

"The venue is obligated to provide a playing surface which is safe for the playing of international rugby and clearly this was not delivered.

"I have suggested previously that the stadium should investigate a hybrid playing surface, similar to the one used at Twickenham, which is 90 per cent grass and 10 per cent synthetic and stood up superbly to the rigours of the Rugby World Cup."

Eddie Jones, the England head coach, played down the issue, even though it clearly limited his pack's ability to dominate the scrum.

"I'm sure in 12 months they'll get it right," Jones said. "We had to cope with whatever they put out there and we coped with that. It certainly negated our potential advantage in the scrum. We'll put up with anything. If they want us to play the next Test at (Sydney's) Coogee Oval we'll play there. We're just happy to play a Test against Australia and beat them."