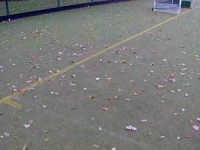 A strange phenomena can be observed across the UK this autumn. Here we are heading towards the middle of October and the majority of our broadleaved trees are still in full leaf and green. So maybe, just maybe, I will get to appreciate the autumn before the dreaded annual event takes place!

If you hadn't already guessed I am talking about the annual leaf fall! Artificial surfaces and leaves go together as well as snow on a beach! Not only are they unsightly and dangerous on any sports pitch, but on artificial surfaces they can be positively ruinous!

Already the phone is ringing from various parts of the country as drainage problems crop up. With the arrival of shorter, cooler days and autumn rain, lack of maintenance in previous years manifests itself now, just as football, hockey and tennis winter leagues get under way.

In many cases this situation could have been prevented by good surface hygiene i.e. by removing all organic debris from the surface before it is broken down either by foot pressure or mechanical brushing.

Any traffic over dead leaves will lead to small organic particles being pushed down into the pile and infill properties. Dragbrushing at this time of year, whilst essential to keep the infill mobile and the surface de-compacted, will only increase the amount of debris in the infill if leaves are not removed from the surface before brushing takes place. 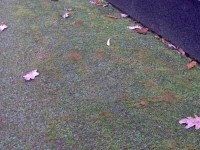 So, out should come the leaf blowers, billy goats and cleansweep or greensweep machines to keep artificials free from leaves, pine needles etc.

Another ever increasing problem is rearing its ugly head again - moss and algae. With a largely dry summer this hasn't been the problem that it could have been, but with a warm damp autumn the mosses are growing, busy producing spores for next spring.

Moss not treated now could lead to an explosion next year. Again, moss growth seems to be a byproduct of poor surface hygiene; it doesn't seem to grow on clean infill but rather on the debris present - another reason to keep debris out of the surface!

What we could really do with is a chemical that shows some residual activity against moss and algae. Most of the chemicals we have trialed seem to give reasonable control in the short term, but surfaces don't stay free for long.

With the end of dichlorophen just around the corner and viable alternatives being cost prohibitive, I'd love to hear from someone who thinks they have a solution to the problem.

Meanwhile, as soon as the first frosts arrive the leaves will be down en masse. My advice - the faster you get them off the better.