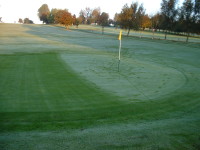 According to the Met Office the end of September and the beginning of October will bring mist and fog with an increased threat of dew, followed by humidity for the rest of the month. "Looking at the further outlook for the U.K., the autumn seasonal forecast, it looks as if we can expect temperatures near or above average with below average rainfall," says a Met Office spokesman. "I would expect these factors to produce conditions where the relative humidity is quite high, which means a lot of dew."

"The trouble is," says Martin Hucklesby, course manager at Merrist Wood golf club at Guildford in Surrey, "that at this time of year the plant is weak, the cell wall is soft and it's susceptible to attacks of disease. This is an eleven year old, 18 hole parkland course and we're no different from anybody else. We all have to deal with the threat of fusarium to some extent." Martin, who has been greenkeeping for over 20 years and in charge at Merrist Wood since 2003 began using a relatively new product, Headland's DewCure after its introduction at last years Saltex (Sept. 07).

"The use of DewCure protects the surface and enables the plant to stay dry when it's at its most vulnerable," he explains. "I can spray the greens and get a minimum of seven to eight day's protection, often more depending on how quickly the plant is growing. The trouble with dealing with dew by mechanical means, either brushing or mowing it off the surface is 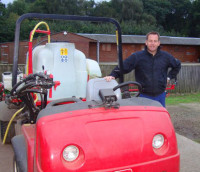 that by the time you're doing this, it's already sat there for three or four hours."

Headland's technical director Mark Hunt says that the product is a liquid surfactant specifically designed to suppress dew and moisture formation on turf, over an extended period. "Minimising canopy moisture can have a positive effect in reducing the incidence of disease," he says. "This is particularly important on fine turf areas where grass canopy heights are low and dew vastly increases moisture levels."

Looking ahead to possible frosts in November, Hunt sees DewCure continuing its role as an important tool within the turf manager's disease management strategy. "The product has also shown a positive effect on frost," he continues. "We have seen treated greens and tees completely clear of frost when other, adjacent areas were badly affected."