by Dr Kate Entwistle
in Consultancy
on 31 Aug 2012

0 Autumn is the time for Leaf Spot... 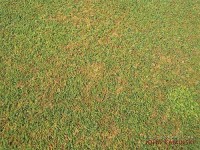 There is a wide range of fungi that cause leaf spot disease on amenity turfgrasses, and these individual fungi will cause damage to different grass types under different environmental conditions. Until quite recently, their effect on close-mown fine turfgrasses was generally considered to be a lesser problem compared with, for example, the damage seen on turf maintained for winter games pitches.

However, with a steady increase in the occurrence and apparent severity of two particular diseases of close-mown turf, the following may help you to recognise the symptoms and manage them accordingly.

Drechslera: There are several species of Drechslera that are known to cause damage to cool-season turfgrass. Perhaps the most common and damaging is D. erythrospila, which causes the disease Red Leaf Spot of bentgrass. As the name implies, this disease is seen on bentgrasses and in a mixed sward, the fescue and meadowgrass will remain unaffected giving a mottled appearance to the turf.

Affected plants are tan to dark tan in colour and also appear dry as if droughted. Close inspection of the leaf may show distinct red spots on the leaf blade, but these are not always present and cannot be used as the sole diagnostic characteristic. 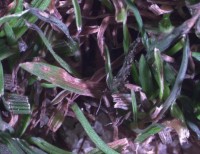 The fungus will be active at all times, except during temperature extremes, but damage is most often seen during the late spring and autumn. The fungus produces spores on the infected plants and these spores have the potential to cause further infections when a water film is present on the leaf. On a dry sward, the fungus remains inactive but, as soon as the sward becomes wet, the fungus rapidly produces spores and its cycle of infection begins again.

Because of this, the best way to perpetuate these types of infections is to regularly re-wet a dry turf. Infrequent but deep irrigation will contribute to an effective management programme for this type of disease problem. A build-up of organic matter or thatch will encourage the development of these diseases, as this will provide a nutrient source to sustain the fungus whilst it is not causing disease.

Nutrient stress will also encourage leaf spot infections but, if they develop, a little and often approach to applications should allow sufficient growth in the plant to aid recovery, without encouraging the weak susceptible plant tissue.

Bipolaris: Although well known as a potential cause of cool-season turf disease, damage by Bipolaris species is not thought to be too common in the UK. However, occasional outbreaks are recorded each year, and the turf samples that I have received from the UK and Ireland suggest that the damage is most likely to occur on annual meadowgrass swards. 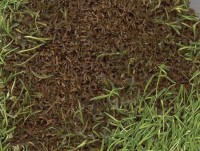 In contrast to the Drechslera infections, Bipolaris infected turf seems to show a darker and more complete deterioration of the infected plants. The entire leaf tissues of infected plants appear to be affected and, once viewed under moderate magnification, the spore-producing structures and the spores themselves, are readily apparent.

Many of the fungicides that are currently available for use on managed amenity turf have shown efficacy against these types of turf diseases and, where necessary, can be used as part of an integrated management programme. Always ensure that the disease is correctly identified prior to the application of any plant protection product.

Chemical Control: There are a number of products available for the controlof leaf spot.

Ensure you follow manufacturer's directions, health & safety and product data sheets, and comply with COSHH regulations when using these chemicals.