Groundsmen who maintain cricket squares will no doubt now be giving thought to their renovation programme and what will need doing. Probably, this will also be going through the minds of the committee members of these clubs.

This is an area where they do not always agree on the priorites. Understandably, the club committee do have to balance the books financially, but I would make this recommendation to both club officials and groundsmen. I strongly believe that topdressing of the square, in the proper context, should take priority.

Many clubs that I have come into contact with have decided that dressing the worn ends of the square is sufficient to address the situation. Frankly, this is not so. If they do this year after year, then eventually, they end up with a large 'saucer' shape to the square.

Where the club have saved money on following this procedure, they will need to come to terms that to put the square right, namely taking the ends down by whichever method to level off the square again, is going to cost them a considerable sum.

It would be advisable therefore that, when topdressing, then do the whole of the square every year giving a level playing surface as required. The work will entail more cost at the time for the amount of loam but, in the long term, well worth it.

Ideally, square renovation should take place as soon as possible after the last game i.e., if the last game is on a Saturday, then start to prepare on the Sunday morning.

Cut the square down to pitch level, in the region of 3mm. This will allow better control over the top dressing levelling. After cut 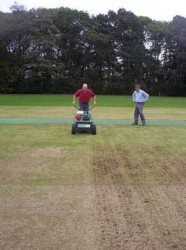 Clean all the debris from the surface either by raking or using a mower. The most important part of the operation is the solid tine spiking. It is advantageous to aim for as many holes in the ground as possible. First, spike up and down in the direction of play, then, across the direction of play. It is then of great benefit to spike in a diagonal direction, for instance, from the right bottom corner to the top left corner and then left bottom corner to right top corner. This will give penetration over the whole of the square, roughly leaving 3" centres throughout the square.

I personally find that the easiest method to topdress the square is to start at the highest level of the square, measure off a pitch width, put down a line and, having a large barrow load of loam to hand, spread evenly across the width of the strip and work backwards luting in the topdressing. It is imperative that the operater does not walk on the area that he is dressing.

If there is found to be an area missed or slightly uneven in this exercise then, by operating on a pitch width, it easy to walk to the side of the area being dressed to correct the problem without encroaching on the treated area.

When the end of the strip is reached, the overseeding can be undertaken, again without walking on the treated area. Measure off the next strip and repeat the operation, and so on across the square. Taking into account the number of holes in the square, the completed operation should leave a surface covering of loam generally of around 2-3mm overall.

Over an average sized square of 30 metres x 30 metres the operation should be completed in a day, weather permitting,

The sooner the exercise is completed, the greater the benefit to the overall condition of the square throughout the winter months. It is also worth noting that to spike on a regular basis through the winter (say, every month) will encourage stronger root growth thereby helping the soil to hold together during the season.