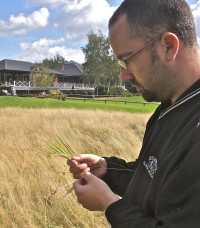 There's a quiet revolution going on in the rough of Bearwood Lakes Golf Club. But it's not so as the prestigious club's members would notice much, for Course Manager and Master Greenkeeper, Daniel Lightfoot, has cleverly timed his Rescue selective herbicide treatments targeting the troublesome Ryegrass and Yorkshire Fog, to coincide with the natural Fescues' autumn senescence. The result is minimal visual impact on the magnificent look of the course now, but come the spring the open, whispy Fescue grasses will grow back, without the dense coarse grasses that make playing conditions difficult.

Daniel reported the real testament is that after last season's initial applications players have stopped raising issues about the dense rough. "The best endorsement I've had is the members' overwhelming 'silence'. When I first came here I constantly had adverse comments about the rough, and how difficult it was to play. Since we've been using Rescue and better practices to manage the rough more effectively we've seen a great improvement that's been welcomed by the players.

"In all honesty the members probably don't know the difference between Ryegrass and Fescue, but they do know when they're losing balls and don't get a decent lie," he said. "I like to think that it's all gone quiet because they are satisfied. Before, they certainly used to let me know if they weren't."

Bearwood Lakes has recently been voted by golfers as offering the second best playing experience of all courses in England and third best throughout the UK and Ireland, according to the top100golfcourses.co.uk website. It's an accolade that the club recognises as being rather subjective on the part of those players who voted, but does highlight its commitment to providing an outstanding playing experience.

The course fairways and semi-rough are all a mixture of Ryegrass, Fescue and Poa annua (AMG), which look handsome and play beautifully. What he wants to avoid the Ryegrass intruding into the Fescue deep rough, along with and other coarse weed grasses, primarily Yorkshire Fog. It is the pale, gently blowing Fescue grasses of the rough that dictate the undulating landscape and the integral design of the challenging Bearwood Lakes. It's clear to see why Daniel is striving to preserve this characteristic. "The rough is every bit as key to the course as the main play areas - visually and for making shots," he insisted. "It has to look right and play right." 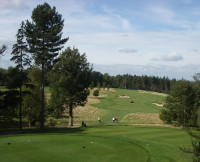 What the club has been aiming to achieve is deep rough comprising of fine, wispy Fescue grass that makes it difficult enough when players stray off the fairway, but facilitating fast ball location and giving players a consistent lie. "Players should be penalised, but have an opportunity to recover," he believes.

"The first day I took over here, six years ago, I stood with the Managing Director, Carl Rutherford, on the clubhouse balcony and he asked me what I thought the biggest area of concern was on the course," he recalled. "We could see players were in the rough looking for a ball. 'That's the biggest problem' I told him - 'wasting time, slow play, annoyed members.' We had to do something about making the rough tough, but friendlier."

From that day, rough - or more specifically the Ryegrass and weed grasses in them - were singled out as a prime target. The introduction of Rescue has made a significant impact on the way that we manage the rough and the cost of keeping weed grasses in check. "We started looking at the potential of selective herbicides for the control of competitive coarse grasses to help the establishment of wildflowers in rough, as part of the pioneering Operation Pollinator research," said Daniel. "It was quickly apparent that there was real potential to manage all the rough grass areas more effectively, to remove the aggressive Ryegrass and coarse grasses that were muscling out the desirable finer Fescue species."

Now, since integrating Syngenta's Rescue into the annual maintenance management plan, he reckons they have turned the corner. All the rough, except the one close to the clubhouse, have now been sprayed at least once and the incidence of weed grasses reduced significantly. The second hole has had a further application, and here the Fescue 'waves' in almost total dominance. It's acknowledged that even here he will have to keep on top of it and will spray annually to keep any re-establishment of Ryegrass in check. 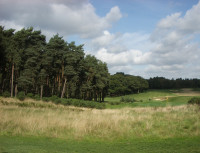 Where there were signs of a little regeneration of Ryegrass, he reported it's decidedly weaker than before and this weakening will continue with further treatments. Even the large expanse of rough directly outside the Clubhouse is set to be sprayed this autumn, with Daniel now confident that the visual impact will be minimal and that he has the full support of the club's members and its management in the strategy.

He added that they will continue to cut and collect all the vegetative material from the rough - a practice that keeps fertility low and encourages Fescue grasses. But as the rough gets thinner with less Ryegrass content, it's a faster and less costly exercise, with less material to remove and compost.

His on-going plan is to spray Rescue once or twice yearly, until the rough is predominantly Fescue, with around four hectares of rough that currently requires the intensive attention. After a couple of years of blanket spraying, he believes sufficient control will have been achieved to enable further treatments to be limited to spot treatment or patch spraying of rogue intrusions.

"Bit by bit we are creating an environment that favours Fescue and is unwelcoming to Ryegrass," said Daniel. "It's a war being won. Players can find their ball that bit more easily and hit it that bit more cleanly."

Carl Rutherford, the club's Managing Director, endorsed Daniel's plan for the use of Rescue from the word go. He very much wanted the rough to be thinner, but left it to his Course Manager to find the best means. Thus far, he confirms he has had good value for money and so have the club's members.

"Keeping our members 100 per cent satisfied and making sure our course is both picturesque and competitive is a difficult balance, but one we always try to achieve," he said. "Daniel and his greens department consistently do a wonderful job. What they are doing with the rough is proving a real plus."

As one Bearwood Lakes' member commented on the 100topgolfcourses website: "This year they have got the balance right. The wispy rough is back up to knee height, but it doesn't grow so thick at its base. Result? - it gives you a penalty, but on the whole you are able to find your ball. I believe they have got it spot on this year."

This autumn greenkeepers in south west England have been the first to take part in the Rescue Club. This new initiative, set-up by Everris (formerly known as Scotts) and Syngenta, gives small groups of turf managers in-depth technical training and the opportunity to test trial the product on their own courses. Further meetings will enable them to share their results and experiences of how to get the best results.

Organised in association with John Palfrey of Avoncrop Amenity Products at the Trethorne Golf Club on the Cornwall/Devon border, Everris Senior Technical Area Sales Manager, Michael Fance, reported the meeting combined technical advice and support, along with practical demonstrations techniques out on the course. "Attending greenkeepers and advisors could quickly see and discuss potential opportunities and applications for selective control of coarse grasses, to enhance fine turf surfaces on their own courses and how to improve their management of rough.

"We look forward to hearing their results at future meetings of the Rescue Club, and stimulating debate to develop further management options to consistently create better playing conditions." Following the success of the first Rescue Club, further events are planned for the coming season, he added.

For more information about us please go to www.syngenta.com
For turf specific agronomy and product information go to www.greencast.co.uk