Chris Biddle, who founded Service Dealer magazine in 1988, has been awarded the Institution of Agricultural Engineers (IAgrE) 2020 Award for Contribution to the Landbased Industry. 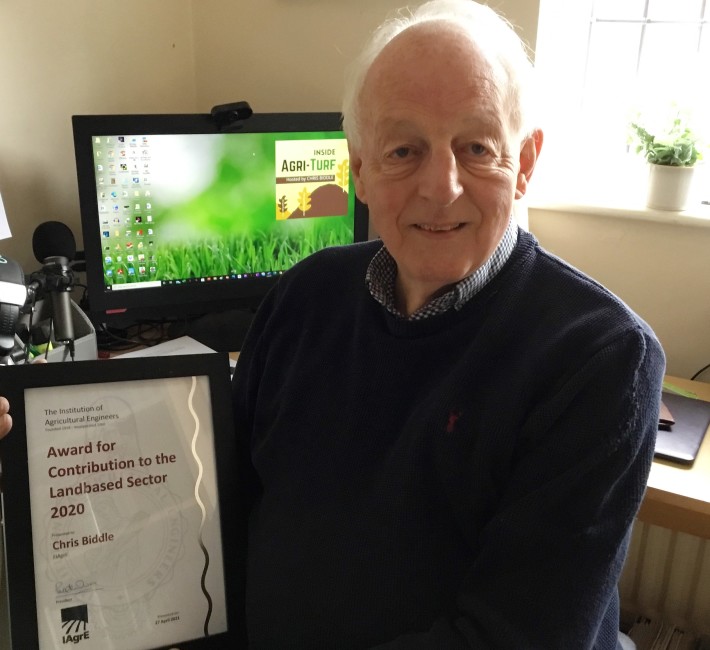 The Award was due to be presented in April 2020 at the HQ of Amazone UK, but the ceremony was cancelled due to the pandemic and was handed over virtually by IAgrE President Paul Hemingway in an online Awards ceremony last Tuesday (27 April). He was co-winner of the Award, which was also presented to industry consultant David Kirschner for his work on developing apprenticeship standards for the landbased engineering industry.

Chris has spent almost 60 years in the landbased engineering industry, starting out as a demonstrator for Ford Tractors based at the iconic Boreham House near Chelmsford.

He then spent over 25 years in an ag and turfcare dealership where he worked as a salesman, ran the grass machinery division and was managing director of a multi-branch dealership in the West Country.

After a change of company ownership, in 1988 he decided to pursue a love of journalism by launching Garden Machinery Retailer which became Service Dealer, and in 1998 launched TurfPro magazine.

In 2015 he sold the titles to the present owner Duncan Murray-Clarke of Land Power Publications.

In 2009, he had also been appointed as the editor of Landwards, the professional journal of IAgrE, a post he held until he decided to retire from the role in December 2019.

The citation that accompanied the Award read, "Editing Landwards is clearly a challenging role. It demands a keen eye on the shifting sands of the Agricultural Engineering and allied industries.

"Chris has always been keen to keep Landwards ahead of the curve in terms of content and editorial and as such, Landwards pushed at the boundaries and is viewed by members as a useful account of the developments of the IAgrE community.

"The IAgrE association with Chris has been highly beneficial and opened doors to new people and new themes. His work has enhanced the reputation of the Institution and introduced us to new audiences.

"On a personal level, Chris is always open to new ideas and ideas for editorial and articles. He then goes out to research these and arrive at logical conclusions which are of interest and value to members."