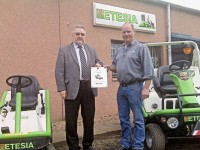 Etesia's managing director, Patrick Vives recently made a special trip from the company's headquarters in France to visit Scotland - his mission was to present Arbroath-based dealer, Angus Chainsaws with an Award.

This accolade came as a result of a 2008 international sales incentive scheme set up by Etesia in which Angus Chainsaws was placed amongst the top five world-wide retail outlets for 'Sales of Bahia ride-on mowers'.

Ken Wallace, a Partner in Angus Chainsaws, received the accolade on behalf of the company. At the presentation, Patrick Vives said, "Whilst this is a great achievement, in some ways it is no surprise - over the past 15 years this dealership has consistently excelled at selling Bahia ride-ons and has, during that time, won a number of UK Awards for high turnover.

In addition, in 2003 they were commended for their 'Commitment and Loyalty' and in 2005 Ken Wallace personally came top in Scotland in our 'Best Salesman' category."

Under the sales incentive scheme, winning dealers from all participating countries received the prize of a luxury holiday for two in Cancun organised by Etesia in January. Ken Wallace had been unable to attend - hence his award was presented to him in Scotland.

Commenting on the large quantity of Bahia sales in Scotland, he says "We experience a high rainfall in this part of the country and the grass grows long and lush. Our customers are looking for a professional-quality ride-on that will cut and collect in all weathers, without clogging - the Bahia fits the bill perfectly."

With a cutting width of 80cm, Bahia is narrow enough to pass between a standard gateway. With "step-through" design, getting on and off is easy and the no-gear hydrostatic drive makes it really simple to drive. It is totally manoeuvrable around flower beds and garden furniture - and even cuts and collects in reverse!

Come autumn, this little workhorse efficiently collects leaf-litter from lawns, drives and pathways, packing the debris into its large collector. A roller for stripes is available and a tow bar for a trailer can be added. There is an optional snow blade for clearing driveways and paths - now that would have been useful this February!!.