"I was very confident that Everris products would do a good job for us, and my trust has been fully vindicated in winning this award." So says Dale Frith of Fleetwood Town Football Club, winner of the Football Conference category in the 2011 FA Groundsman of the Year Awards.

Now in their 10th year, the awards consist of seven separate categories in which grass roots groundsmen at non-League football clubs throughout the country are recognised for their efforts in enabling thousands of matches to take place each week on a high standard of playing surface.

The awards are presented to the seven groundsmen judged the best following visits by a panel of Premier League head groundsmen.

Having joined Fleetwood Town in October 2010, the results achieved by Dale on the club's pitch in the six months prior to the judges' visit are a credit to his groundsman's skill and the faith that he placed in an Everris' - formerly Scotts - iTurf programme.

Everris' Turf & Amenity team, using specially developed iTurf software, can provide a tailored, site-specific programme for the year that seeks to eliminate turf problems by taking appropriate early action. Implementing it requires turf professionals to draw on all methods available to them - cultural, biological and chemical. Its aim is to make it as easy as possible for groundsmen to implement integrated turf management (ITM) based on research data rather than ideas and theory, so the company instigated a series of trials at STRI several years ago. iTurf is based on the resulting data and further research is taking place continually. The integrated turf management approach mirrors Everris' company philosophy of using the best products in the most efficient and responsible way." 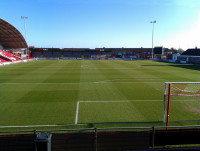 Previously, the club had been using a mix of products but Dale took the decision to switch entirely to Everris fertilizers due to his experiences at clubs and organisations where he had worked previously.

These include Blackburn Rovers FC, the All England Lawn Tennis & Croquet Club, Wimbledon, and, most recently, STRI, where one of Dale's duties was to oversee and advise on pitch preparations for the 2010 FIFA World Cup, staged in South Africa.

"Fleetwood Town is a very ambitious club with Football League membership as its number one priority," commented Dale. "My goal from the day I was appointed as groundsman has been to raise the condition of the pitch to League standards. I am fortunate in being able to build on a sound base provided by the club which involved levelling the pitch and the installation of full drainage and irrigation systems in the summer of 2009."

Having known Everris' technical area sales manager, Simon Hardcastle, since his time at STRI, Dale's first call as Fleetwood Town's new groundsman was to seek Simon's help in establishing a turf nutrition programme capable of bringing sustained, long-term improvement to the health, appearance and playability of the club's pitch.

The first Everris product applied in early November 2010 was Greenmaster Pro-Lite Autumn, a granular 6-5-10 fertilizer with added six per cent iron which helped harden off the turf prior to winter while boosting root development, turf health and appearance.

"Applied at a rate of 30 grams per square metre, the autumn fertiliser treatment saw us nicely through what turned out to be a fairly hard winter," said Dale. "However, the real boost to the pitch came this spring with an application of Greenmaster Pro-Lite Invigorator 4-0-8 in March followed in early April by Sportsmaster Spring and Summer, a 9-7-7 mini-granular fertilizer that breaks down quickly to encourage rapid uptake of nutrients, helping reduce the risk of scorch and mower pick-up.

"We applied Sportsmaster at a rate of 35 grams per square metre, and we observed very impressive results within a week," he recalls. "The timing of the application was spot-on as we received our judging visit by two Premier League head groundsman in mid April. I was delighted with their positive reaction to the consistent colour and excellent overall condition of the pitch and remember thinking that we might just have a chance of winning an award."

"I am the only full-time groundsman employed by the club and have a part-time assistant in Nick Hyndman to help with every-day tasks such as turf repair, mowing and white-lining on both the main pitch and training pitch," explained Dale. "Primo Maxx did a great job in reducing the amount of mowing needed during the height of the summer, enabling us to concentrate fully on preparing the best possible laying surface for the start of the new season. We have achieved great results during my first year at the club and, with Everris' help, expect to achieve continued sustained improvements in the years to come."

Simon Hardcastle added: "An effective nutritional programme using the best products is within the reach of all budgets. Since joining the club, Dale has worked hard to produce a superb playing surface. He deserves the accolade he's been given and we're pleased to be working alongside him."