by Myerscough College
in Training & Education
on 09 Sep 2015

As the academic year reaches its climax, we again celebrate the achievements of learners across our range of provision.

The College has a long tradition of holding a series of award ceremonies across all the centres, celebrating the success of those on Foundation Level, Further, Higher and Apprenticeship Programmes in all academic disciplines. Congratulations to all the achievers and graduates, many of whom are now embarking on new careers or seeking to aim higher with further study and progression.

Ann Turner, Principal and Chief Executive of Myerscough College said, ''Our awards ceremonies recognise and celebrate the achievements of Myerscough students across all centres and, for those studying online, throughout the world. It's a time to celebrate and to mark the end of one stage of life's journey and to reflect and focus on the next.''

''Students have worked towards this for a long time and the results this year reflect the commitment and hard work of the students and staff of Myerscough College. We remain one of the top performing Colleges in the country with high progression into employment or onto further study. Many of the industries we support are reporting significant skills shortages and opportunities are available to forge an exciting and interesting career based on your studies at College. 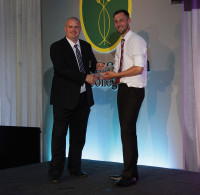 The winner of the Myerscough College Intermediate Apprentice of the Year is Ashley Roach from Fleetwood Town Football Club.

Ashley's tutor Tracy Woollam comments on his success, saying; "Ashley continued to develop his abilities throughout his time on the Level 2 Diploma course, gaining both practical and knowledge based skills from a committed Head Groundsman; which continues to this day with Ashley currently undertaking the Level 3 Diploma in Sportsturf. Ashley's continued commitment and passion to provide a quality playing surface has clearly showed throughout his study time and course work with Myerscough College, making him a worthy winner of this award."

The awards for Greenkeepers were sponsored again by BIGGA and the Intermediate award went to Matthew Forder from Marland Golf Club in Rochdale.

Matthew was unable to attend the award due to other commitments but commented on his achievement saying; "It's great to receive this award and I would like to thank my tutor Tracy Woollam and my employers for giving me the chance and for the support during this Apprenticeship. Apprenticeships are a great way for young people to find jobs, and I would recommend them to anyone looking for this type of career."

The advanced winner was Billy Hayes from Lutterworth Golf Club, who has also contributed with a video case study about his training journey and gives his advice to other young people looking to become Apprentice Greenkeepers.

Billy works as part of the Greenkeeping team at Lutterworth Golf Club under the supervision of Head Greenkeeper, Jonathan Barr. Billy has recently completed his Advanced Level 3 qualification and has received the award for his hard work and dedication during the programme.

Billy's workbased tutor Martyn Lumb from Myerscough College said; "Billy is a truly exceptional Apprentice. He has worked at Lutterworth since he left school at 16 and has now completed both Level 2 and Level 3 programmes. He also now acts as a workplace mentor to the new Apprentice at the club. Billy never thought he could achieve this level of qualification and I know his future is bright in the Golf industry." 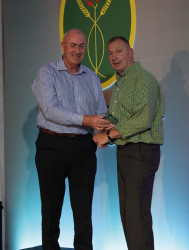 The awards for Groundsmanship were sponsored by Liverpool Football Club and the winners were Ashley Roche from Fleetwood Town FC for the Intermediate, who was also an overall winner and to Jonathan Watkinson from Oldham Grammar School for the Advanced level 3 programme.

Jonathan's workbased tutor David Hilton said, "Jonathan is a worthy winner simply because of the amount of hard work he put into the course. He has gathered a huge catalogue of workbased evidence, and completed all the underpinning knowledge units, months ahead of schedule and to an exceptionally high standard. Excellent work Jonathan and well done on your achievement." 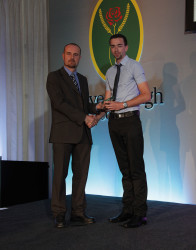 The winner of the Myerscough College Advanced Apprentice of the Year is Tom Dixon from Quarry Bank Mill, Styal which is a National Trust site. Nick Atkinson, workbased tutor comments on Tom's success, saying; "Tom is a truly outstanding apprentice, having begun his horticulture career working at Northcote under the direction of renowned chef Nigel Haworth. Since completing his level 3, Tom has embarked on a new challenge working for the national trust at Quarry Bank Mill Styal. I have no doubt that Tom will be a name to watch in the future."

Employers were also recognised, with the large employer of the year award going to Liverpool Football Club for their continued engagement and support of Myerscough College, in particular around Apprenticeship recruitment and training.

Lee Price, Employer Services Manager, Myerscough College said; "Liverpool Football Club have a longstanding relationship with Myerscough College, having delivered Apprenticeships, Workbased Training and Industry Short courses to a large number of their employees. The support received in the workplace is second to none, and their Apprentices are given an outstanding introduction into the world of Groundsmanship. The recruitment, selection and interview process used at Liverpool is one we see as best practice for businesses when recruiting Apprentices. 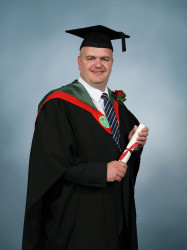 At the College awards, Manchester City Head Groundsman, Lee Jackson also accepted the highest honour that the College can bestow. Lee has been inducted into the College's elite group of inspirational people and joined a very exclusive club that contains names from the world of business, sport and entertainment.

Lee has been awarded a Myerscough College Fellowship in recognition of an outstanding career and contribution to the Sportsturf industry.

Lee started work at Manchester City's old Maine Road ground in August 1991 as one of eight Groundstaff. Very little emphasis was placed on education for Groundsmen back then, however this changed in 1999 when Lee started a NVQ Level 2 in Sportsturf through Myerscough College on a work based learning programme. He then moved through into Level 3 and Level 4, as well as gaining an Assessors qualification, and also doing a part time Foundation Degree in Sportsturf Science through a three year programme.

Lee has been nominated for numerous awards over the years including being part of the team that won the Premier League Groundsman of the Year Award in 2003 and three more 'Highly Commended' awards in the following years.

Lee's career highlight to date saw him named Groundsman of the Year in 2011, two years after he was made Head Groundsman at the Etihad Stadium. Accepting the Fellowship, Lee said: ''This really is an honour and big thanks to the College for nominating me for this fellowship. After I completed my studies with Myerscough back in 2006, I thought that would be the end of my association with the College but to continue to work with students on an ongoing basis is great for me and the club and I like putting something back."

''There's a tradition of sportsturf students from Myerscough College going on to big things in the football industry - for example the Head Groundsmen at Real Madrid and Paris Saint Germain are also ex-Myerscough learners. In addition, each one of Manchester City's eighteen strong groundstaff have all been through Myerscough programmes and the high standards of our surfaces is a testament to the support we get from the College.''

The academic year may have ended but work goes on for the Apprenticeship and Workbased Teams at the College. The programmes are roll-on / roll-off and can start at any time of the year. We continue to support a large number of Sportsturf employers with their recruitment needs and the summer is usually a busy time as new recruits begin their careers after leaving school.

To find out more about your progression opportunities from apprenticeships onto Foundation Degrees, Honours Degrees and Masters... or to get advice and guidance with any training need, please contact Employer Services team on 01995 642255 or email employerenquiries@myerscough.ac.uk