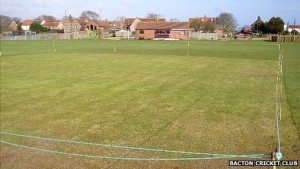 A cricket club has been barred from its home of 36 years after refusing to agree to a ban on hard balls being used during batting practice on the pitch.

Club chairman David Gale said the rule was "untenable" and talks were in place to move the team to North Walsham.

Bacton Parish Council said the rules were enforced to "protect the public".

We are a cricket team - how are we supposed to practice without cricket balls? Are they expecting us to use tennis balls instead?" David Gale Bacton CC chairman

The council said the club had been banned from the Cubitt Memorial Playing Field for failing to agree to the new set of rules.

The ban could be made permanent if the club fails to sign the agreement within two months.

The move has led to the club playing all of its Norfolk Cricket League Division Six matches at away grounds.

Council clerk Elaine Pugh said there had been a couple of recent "near misses" in which other people on the field had almost been hit by cricket balls.

Batting or bowling practice with a cricket ball or other solid or semi-solid practice ball must only take place inside the batting cage [nets]. Under no circumstances may this take place elsewhere

She said the rule was included in a complete set of new ground regulations to satisfy insurers' demands and protect people at the nearby bowls club, children on the play area and young people who also used the facilities during the week.

See the rest of the article sourced from BBC