0 Badgers, crows and the war on cricket pitches 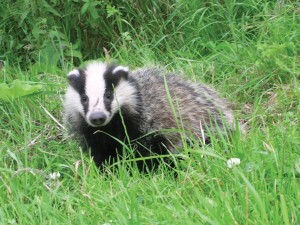 As a rule, I am mistrustful of badgers. My unease around them dates back to a traumatic incident when, returning home somewhat worse for wear, I was menaced by a pair of particularly ornery critters. They emerged from the hedgerows, panting and growling, and descended on me with ill intent in the gloaming. A stick-up. Not at all the impression I'd been given to expect from the Kenneth Grahame stories I'd read.

Diligent readers may recall that a fortnight or so ago there was a report in these very pages on the happenings at Rickmansworth Cricket Club, where the start of the season has been disrupted by a rampaging pack of ravenous badgers, who have torn up the turf around the outfield. Or rather, a rampaging cete of ravenous badgers. "Know your enemy" is, after all, one of the first instructions of Sun Tzu's The Art of War, so we should use the correct collective noun. "I arrived at the club on Good Friday," says Rickmansworth chairman Mark Raine. "And my first comment was: 'This looks like something you'd see in the first world war.'"

So far, so fnarr fnarr, I thought, a good little story for a quick giggle. And then bad news began to trickle in from other clubs around the country. Something altogether more serious was at foot. Rickmansworth, it seems, was only the opening skirmish. The badgers, possibly aggrieved by the threat of a cull and aggravated by the increase in man-on-badger violence, seem to have decided to hit back by launching a concerted badger campaign against our beloved summer game.

Nearby Berkhamstead CC was also under threat, though their ever-vigilant chairman Julian Dent was standing sentry with a cricket bat, which the local paper felt meant the club was "safe from badger attack, for now". To draw him away, the badgers have been mounting diversionary sallies on the neighbouring castle, a tactic that they've also been using in Carmarthenshire, where they've targeted Dylan Thomas's graveyard, near Laugharne CC.

Badger-peril, it seems, is the latest in the long list of concerns confronting club chairmen across the country, along with the prospect of a tax bill from HMRC, the supply of cheese-and-pickle baps, and the two Australian ringers over here on a gap year who have been recruited by the side down the road. The trouble is, of course, that badgers are protected by law. And by Brian May.

So, in the spirit of public service, the Spin decided to seek, and spread, the advice of the experts at the Badger Trust. According to them, there are three traditional badger deterrents: "Male human urine, human hair clippings, and lion dung." Two of these three, it has to be said, are hard to come by at most cricket clubs, where balding men tend to vastly outnumber the lions in the XI. The third, thankfully, is in plentiful supply.

"We did discuss the possibility of peeing on our own outfield," says Raine. "Someone told us that there is, believe it or not, a badger-deterrent product on the market called Slash Away." At first Raine thought they were taking the piss. It turned out they were selling it. "It's bottled urine. The trouble was that our groundsman absolutely refused to let us put it down." If there is one thing that irks a proud groundsman more than badgers, it's the idea of pee all over his lovingly-looked after outfield. Rickmansworth ended up spending "hundreds of pounds" on garlic spray instead. They were, at least, now secure against vampire-attack. But the badgers were entirely undeterred.

Badger Trust spokesman Jack Reedy is unsurprised. The only way to repel badgers, he says, is with electric fencing around the boundary. "Double strands, between two and six inches from the ground." This may, he admits, present "certain difficulties for average village cricket club", but it would have the corollary benefit of saving on laundry costs by deterring fielders from diving around the outfield.

"Besides," Reedy added, "it wouldn't do anything about the crows."

"Oh yes. I've been called out a couple of times this year to deal with badger damage when it turned out that crows were behind it all."

see the rest of the article on the following Link :- The Guardian