Preparing for a world class annual sporting event on a green field site with minimal permanent infrastructure, let alone a site that returns to being a historic park, and its owner's 'back garden' outside of the event build up period, would be a serious challenge for most grounds teams.

Add to this a 'field of play' measuring thirty acres and spectator numbers of 150,000 over four days, and the task facing Hugh Thomas, Event Director of Badminton Horse Trials and his contractor Phil Cole becomes even more momentous.

In addition to the 6500m long cross country course, there is a 110 x 75 metre grass main arena which is in use on all four days of the event, and the competition plays host to the most successful competitors in the sport, including Olympic and world champions. 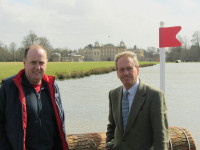 ee-day events classified by the International Equestrian Federation (FEI) - for some forty years. But, as Hugh Thomas explains, in 2007 it became clear that more specialist help was needed.

"It had been a very dry spring, and the park, which is home to sheep and deer, had been overgrazed, so the ground was hard and rough. We spread copious amounts of sand and the footing became acceptable for that event, but we knew that it needed more attention."

"John suggested that I contact Phil Cole who, as well as offering contract services to the racecourse, also looked after Cirencester Park's polo grounds, so had plenty of experience in maintaining equestrian surfaces."

s been an important part of the team ever since, supplying specialist machinery and manpower, whilst working alongside Badminton's retained groundsman who carries out routine tasks such as mowing.

He explains: "On studying the cross country course, it became clear that it can be divided into two parts: the top half being free draining on Cotswold brash, which is close to the surface in places, and the lower half featuring heavier soils which are less free draining."

Phil cut the sward right back, scarified and aerated the surface and noted that plant populations were quite low. And there was the weather to contend with - whilst dry conditions had blighted the 2007 event, the summer that followed was notably wet.

"We were dealing with the effects of drought initially, but we also needed to prepare for wet weather," he says.

Hugh agrees: "Running an event in early May, you expect it to rain, and most years it does and we cope with it."

A Wright Rain hose and raingun irrigator was purchased. "We don't have access to a lot of water, but at least we can 'tweak' the going in the run up to the event, if it needs it, and stimulate grass growth," Phil comments.

Land drainage was also installed by a local contractor on the lower part of the course, with drains located either side of the track.

Improving the footing was relatively straightforward, and involved spreading large quantities of 2mm sports sand, which is ninety percent silica. In dry areas, such as close to Badminton village and around the 'quarry' feature fence, 12mm grade green waste compost was also added to improve soil structure. Topdressing has continued to be an important part of the preparations ever since.

"We like compost to be well-rotted and will also mature it further in the yard where possible," comments Phil, "Sand holds water and nutrients to a degree and helps create 'spring' in the surface."

Phil then overseeded to improve the sward itself, using 25g/m2 of a predominantly rye grass mix designed for winter sports pitches or racecourse use. This has since been replaced with an 80/20 rye/fescue mix for shaded areas such as woodland, and the course is overseeded after each year's event as required.

"Because of the sheer scale of the job we use middle to top end varieties from Limagrain, and choose three different mixes in case one fails."

A 2.4m wide BLEC disc overseeder is used in two or three directions in the arena and in a staggered pattern on the course, which is just 10m wide in places.

Fertiliser is usually applied in two doses, starting in mid-March, at 75kg/acre with a 10:15:20 blend used first, followed by 21:8:11, although the cold spring of 2013 has meant just the one application at slightly higher rates.

"I was lucky enough to get the timing just right - two days later it rained!" says Phil. 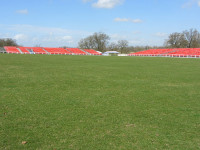 Herbicide is normally applied in the spring, although if conditions dictate it can be used in July instead. Disease management is minimal, with fungal diseases such as red thread best tackled by boosting nutrition

One of the challenges - faced by few other groundsmen - is grazing management.

"We have to consider the impact on the course and the parkland itself from grazing animals, as the central part of the park is grazed by deer and sheep within a deer fenced enclosure, and the remainder by sheep. From December to May, the track itself is electric fenced to keep the stock off it although, in general, the sheep are of benefit to the ground, keeping the grass down, avoiding thatch build up and adding nutrients with their manure," explains Phil.

Deer are slightly less beneficial, but the herd is moved to other parts of the park in the spring. "It is effectively a construction site for a month beforehand and, for safety's sake, the deer are better out of the way at this time!" says Hugh. In the spring of 2013, ground cover has been sparse, although good growing conditions at the end of April gave a welcome green-up.
"Ground cover is not really an issue as long as the soil is right, and the footing is as good as ever," comments Hugh.

Different equestrian sports have varying requirements for the sward - from the lawn-like finish of a polo pitch to 3-4in cut heights for national hunt racing. A Port Agric tractor-mounted rotary finishing mower is the tool of choice, backed up by Phil's Major Toppers.

Hugh explains: "The grass needs to be about 2in for cross country - any longer and it can be slippery, any shorter and the ground will cut up."
Phil adds: "On walking the course after the event, it is possible to assess whether you have got it right, and we see little cutting up. The horses hooves need to go in slightly to get a good grip, but without jar to their joints. There is no set standard as yet - it's all down to feel."

With such meticulous preparations, last minute work is minimal, although Phil can aerate if there is not quite enough give in the ground, or sand any small areas that resolutely remain boggy.

However, the dry cold spring and resulting lack of grass growth meant that fertiliser application and mowing has been delayed this year. Even the pristine main arena, which hosts the dressage and showjumping phases, and is the site for two cross country fences, was still to be mown at the end of April.

Surrounded by grandstands and hospitality marquees, the arena had an early reprieve from the bitter winds and was greening up - it is managed in exactly the same way as the cross country course, apart from getting extra fertiliser and more frequent cuts.

"The dressage arena actually gets more hammer than anywhere else, with the hooves of eighty horses following the same track, and I can almost see where last year's horses went," says Phil.

When the crowds have gone home, the elite event horses have been loaded back into their luxurious horseboxes and the marquees and portaloos have gone, Phil's work begins again in earnest.

fHe fills any divots and then cuts back the sward, scarifies and topdresses in preparation for overseeding. A second fertiliser application may also be made. "A feed at this time helps to improve the root structure," he comments.

Aeration is also an important task as it helps nutrients and topdressings get into the soil, as well as encouraging root growth, and is carried out in the autumn as well as the spring.

"I've always used a Verti-Drain, but this autumn I'm going to try a Shockwave aerator, which is more aggressive and has a linear effect. The two machines have been shown to work well in combination and it will be interesting to see the results here."

With numerous trees in the parkland setting, leaf clearing is necessary to prevent the dead leaves damaging the sward. Like many groundsmen, Phil found the job even more arduous in the wet autumn of 2012. Tree surgery is another ongoing task, principally to avoid the risk of spectators being hit by falling branches.

After a late spring deluge that led countless sporting fixtures to be postponed or cancelled, it was still a shock to many when Badminton Horse Trials was called off less than a week before it was due to start.

"We had a downpour on already sodden ground on the Sunday prior to the event starting on the Wednesday and, when I contacted the Met office to be told that there would be further rain on Tuesday, Wednesday and Thursday, it was obvious that it couldn't go ahead," explains Hugh Thomas.

"It is possible that we could have got the cross country course dry enough to run the horses safely, but there were also the car parks and trade stand areas to consider," adds Phil Cole.

Badminton attracts 150,000 visitors each year, the majority of which attend on one day; cross country day.

"Whilst we have added a very small amount of infrastructure, such as hard standing pay lanes for the car parks, this is a historic park which is also a family home, so it would not be appropriate, even if it were financially viable, for one event a year, to 'weatherproof' it," comments Hugh. "We are used to the wet, but 2012 was a one-off."

The first event took place in 1949 - After a none-too-successful 1948 London Olympic games for British riders, the Duke of Beaufort had the idea to hold the event for home grown competitors to train for international events. It has since become arguably the most famous international event itself and, outside of the Olympics, the most coveted title in the sport.

For the first ten years, the dressage and show jumping arenas were sited on the old cricket ground in front of Badminton House. Torrential rain in 1959 turned the park into a sea of mud and the arenas and trade stands were moved to their present site.

The first European Eventing Championships were held at Badminton in 1953.

Bad weather has caused the cancellation of Badminton on four occasions - 1966, 1975, 1987 and 2012. It was also cancelled in 2001 due to foot and mouth disease. The severe winter of 1962/3, which continued into the spring, forced Badminton to downsize to a one-day event in that year.

Including the car parks and trade stands the total area covered by the event is 200 hectares (500 acres).

Eventing comprises three phases: dressage, cross country and show jumping, theoretically run over three days at the top level, although the large amount of entries necessitates two days of dressage at Badminton and stretches the event to four days. At the 2012 London Olympics, Great Britain won team silver in this discipline.