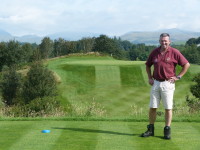 Windermere Golf Club, in the heart of the Lake District, has dramatically extended its playing season after switching to Barenbrug's BAR Extreme grass seed mixture.

This perennial ryegrass blend is ideal for divotting golf tees, and head greenkeeper David Wilkinson switched to the mixture three seasons ago to do just that. But David says that the biggest benefit to the 18-hole course has been extended play, thanks to the product's rapid-establishment and hard-wearing characteristics.

"This is my third full season using BAR Extreme on the tees and the results are tremendous," he enthuses. "The speed of germination and how it fills out the divots is exceptional. But the biggest impact has been the extension of the playing season. We previously had a short season as the challenging climatic conditions in Cumbria limit the premium grass growth period. But, since using Barenbrug's BAR Extreme, we're overseeding in February ready for a March start and are then not coming off until the second week of November."

With the course dubbed 'the miniature Gleneagles', David says that the improved quality, wear tolerance and persistence of the tees is all the more remarkable given their relatively small size. "We have small tees and so they get a lot of wear," he continues. "But since using BAR Extreme we're back playing on them just 10 days after overseeding. We get a quick, uniform strike that fills in quickly and without the scarring from divots."

As a result, David's closed season is now down to just four months, which has brought wider benefits for the club. "I've been here six years now, and we usually came off the tees in mid-October. But we're economically better off since using this mixture - people don't want to play off mats, so we're attracting more visitors because they can play later or earlier in the season on good course conditions. It's phenomenal!"