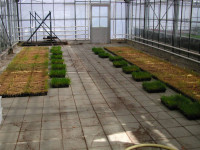 Commercial field trials of a Glyphosate tolerant perennial ryegrass have been given the green light by Barenbrug UK.

The move follows extensive independent laboratory and field plot trials at the STRI, together with glasshouse trials undertaken by Barenbrug Research. All trials have shown that 4ER 2703 consistently maintains optimum recovery after applications of Glyphosate.

Developed specifically for the professional market, 4ER 2703 - to be marketed as BAR GT - is a fine leaved perennial ryegrass with the same breeding as Bargold. Importantly, it has the appearance of a traditional fine English ryegrass, but with the added bonus of excellent wear tolerance. 4ER 2703's breeding followed contemporary and not GMO breeding disciplines.

Commenting on the start of the trials, Barenbrug's research and development manager, Jayne Leyland, said: "This is an important step forward in being able to produce turf free from Poa annua contamination, especially when you consider the continuing removal of active ingredients and the threat of even more stringent regulations to come."

Throughout the trials at the STRI, 4ER 2703 has shown its tolerance to Glyphosate. "We had an added bonus of seeing how resilient it is in sharp contrast to the effect the chemical had on Poa, when the 2005 Lawns, Landscaping, Summer Sports turf trial was sprayed off," Jayne continues. "The Poa was dead, but despite an application rate of five litres per hectare, 4ER 2703 survived and showed excellent recovery."

Pot trials started in 2004 to determine the effect of increasing dose rates. 4ER 2703 was compared with other cultivars of perennial ryegrass as a straight and in a mixture with Barpearl slender creeping red fescue. Treatments were applied when all grasses had reached growth stage 13 and assessments made at seven, 14, 22, 28 and 56 days. The phytotoxic effects of a 3.0 litres per hectare application rate were less severe both as a straight and in a mixture for 4ER 2703, and recovery started at 28 days.

Field plot trials started in May 2005 with assessments lasting two months. Differing application rates of 1.5, 3.0 and 6.0 litres per hectare of Glyphosate were used. Again phytotoxic effects were significantly less severe with 4ER 2703 both as a straight and in a mixture when treated at both 1.5 and 3.0 litres per hectare.

When sown in a mixture, a minimum of 50 per cent 4ER 2703 appeared to be required to maintain optimum recovery. This study suggested that the application rate of 1.5 litres per hectare should be the upper limit to enable 4ER 2703 to maximise its recovery.

The next field trial in August 2006 was designed to test the implications for Poa contamination and again the trial lasted two months. 4ER 2703 was tested as a straight and in a mixture with 30 per cent Barpearl slender creeping red fescue and a non-tolerant perennial ryegrass. The trial produced two major statistical outcomes - the higher the application rate the more damage was observed and there was a grass species effect with the non-tolerant perennial ryegrass showing the highest level of damage.

In this trial application rates ranged from 0.5 to 1.5 litres per hectare. After two months no plot exhibited phytotoxic effects, however bare patches remained.

This trial continued after the two-month period to assess live ground cover and 4ER 2703 did not have any loss 59 days after treatment, regardless of the application rate. This indicates that all plants recovered. By comparison the non-tolerant perennial ryegrass exhibited 50 per cent loss of cover when Glyphosate had been applied at 1.0 and 1.5 litres per hectare.

Jayne concludes: "These early results are extremely encouraging and we await the outcome of the commercial trials with bated breath. We hope that the first quantities of commercial seed will be available in 2010."