0 Bard day at the Office! 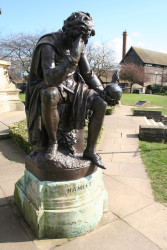 A Recent trip took me to the King Edward VI Grammar School in Stratford-upon-Avon, one of the oldest in Britain dating back to 1427. It is believed that the Bard himself,William Shakespeare, attended the school.

The school provides education for over 400 boys. It has an excellent reputation for its sporting prowess, particularly rugby. In recent years it has reached several national schools. The sports grounds are set in 20 acres (8 hectares) on a natural flood plain providing space for two cricket squares, four rugby pitches and one grass hockey pitch, plus training grids and net practice areas.

The site is bordered by mature trees, shrubs and flower beds. The maintenance of all these facilities is carried out by two self employed Groundsmen, Geoff Calcott (an ex pupil of the school) and John Bishop; it is a role they have undertaken for the past nine years. Previously, the school had employed its own Groundsman.

In addition to the school grounds, they also oversee the work at several local cricket clubs in their capacity as advisors and suppliers of services. Geoff is also a ECB Cricket Pitch advisor for Warwickshire.

Both started their grounds maintenance careers as volunteer Groundsmen during their playing days at two local cricket clubs - Geoff at Stratford upon Avon CC and John at Shipston upon Stour CC.

The school pays a set annual maintenance fee for their labour, and allocates a budget for materials and machinery repairs. All the machinery on site belongs to the school.

During my meeting with them I could sense a real enthusiasm and collective bond in their determination to produce the best surfaces possible with the somewhat limited resources they had at hand.

Geoff and John spend every nearly morning at the school, generally working from 7.00am to 1.00pm daily except for Sundays.

The work is concentrated around the pitches with other areas given whatever time is left.

The equipment at the school is fairly basic and consists of:

Geoff and John usually hire in additional equipment when needed. For example, during their cricket pitch renovations they hire in a Graden scarifier and Groundsman spiker. Regular surface aeration of the outfields and rugby pitches is achieved with the Quadraplay Slitter and, once a year, usually around late February or early March, they hire in a Vertidrain for deeper aeration.

The sports pitches are totally free draining, the natural flood plain they are built on has an underlying gravel layer. There is no secondary drainage system whatsoever.

Fertiliser programmes are in keeping with the performance of the sward.

Annual soil tests are carried out in March, both on the cricket square and sportsfields, to establish the nutrient status of the soil profile. Even then, the amount of fertiliser applied is often dictated by the budgets available. The fertiliser regime for the winter pitches and outfield areas begins in August when a 12:6:6 large granular slow release fertiliser is applied at 10 x 25kg bags per pitch.

Ideally, this will be followed in March with a spring fertiliser to help restore some much needed growth back to the rugby pitches, which also double up as the cricket outfields. Grass mowing height is kept at between 35-50 mm all year round, mowing as required - usually twice weekly during the growing season and once a week during the winter months.

The Quadraplay is used extensively, a combination of its brush slitter and light roller in varying configurations, which present the pitches for play and helps restore levels after.

The winter pitches, for rugby and hockey, are marked out weekly using a battery powered spray jet line marker.

During the summer a 6 lane 300-metre running track is laid out and over marked weekly.

The rugby season ends in April and the pitches are immediately given over to cricket. What is remarkable is that, with less than 40% grass cover left on these pitches, and with no topdressing or overseeding ever being implemented during the past nine years, they seem to respond to some tlc and recover to provide an acceptable surface for summer sport.

The square is small in comparison to many schools, with just five strips, but that is adequate for the number of fixtures the school plays. A dose of worm killer (carbendazim) is applied in March to keep the surface free from casts.

Pre season work begins with 6-8 hours of rolling with a 30 inch cylinder mower building up the weight with ballast until it is time to use the heavy 1¼ ton cricket roller. Verticutting is carried out fortnightly on the square to keep the sward upright and to allow air circulation around the base of the grass plant.

During the playing season the pitch is prepared on a 10-14 day cycle depending on its condition and the prevailing weather conditions. An old Ransomes Auto Certes is used to prepare the strips.

Once the cricket season is over, usually early August, a programme of renovations are instigated. Geoff brings in a Graden to help key in the new
Kaloam topdressing materials, applying around 5-6 25 kg bags per strip, and then overseeds with a pure ryegrass mixture.

Aeration of the square is usually carried out three times between October and December with no further aeration until the following autumn.

Geoff regularly takes a number of cores from the square to check on its condition and root performance, taking them from areas between the strips. Visual inspection of the 100mm cores allows judgements to be made on the square's performance and help diagnose any relevant work that needs to be carried out.

In the last fifteen years the school has only lost a couple of fixtures due to wet ground - a testament to the benefit of having free natural draining soils and the dedication and skill of the groundstaff.

Both John and Geoff are proud of the standard of the work they manage to produce under the circumstances and,like most Groundsmen, are always
striving to improve their facilities.