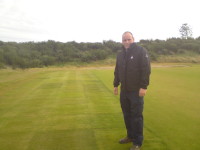 Castle Stuart's course manager Chris Haspell says that Barenbrug-bred cultivars are performing particularly well in a fescues trial at the Scottish Highlands links course - an observation supported by the latest set of data.

Sown in summer 2009, the independent trial run in consultation with the STRI includes 40 cultivars from a variety of grass seed companies and aims to identify the next generation of fescues suited to this renowned fescue course and others like it.

Chris reports that Barenbrug's Hardtop hard fescue and Viktorka slender creeping red fescue have proved highlights of the trial to-date. Indeed, in spite of the harsh winter in 2009/10, both cultivars demonstrated their winter hardiness, strong winter green and quick spring green-up in the latest round of scores, achieving 7.5 each.

"The findings of the trial thus far have been fascinating for both myself and my industry colleagues who have visited the site," Chris comments. "There's striking differences in disease tolerance, sward density and colour - I'm especially interested in the fescues showing disease resistance to dollar spot and fusarium."

He concludes: "It's fair to say that Barenbrug cultivars are performing well against others. The trial is very valuable for finding solutions for the future and will certainly inform my seeding plans going forward."

Hardtop and Viktorka both feature in Barenbrug's 100 percent fescue blend, BAR 22 - for more information on this and other fescue mixtures call 01359 272000 or visit www.barenbrug.co.uk