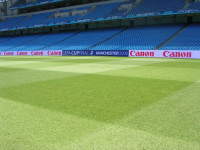 Barenbrug has been praised for its specialist grass mixture's performance on the pitch at the City of Manchester Stadium, venue for the recent 2008 UEFA Cup Final.

"We came into the spring on the back of a difficult winter for the pitch," says Lee, "but after overseeding in both March and April, and with the help of some excellent weather, the pitch recovered for the final. Both head groundsman Roy Rigby and myself have been very impressed with the specialist mix that Jayne Leyland (Barenbrug's research and development manager) put together last year, which has also helped to reduce disease incidence by over 50 percent.

"As a result, the pitch finished the season with a grass cover that certainly I have never seen before at the end of the season. Both the managers of Zenit and Rangers were impressed with the pitch, and UEFA also commented on what it called "the outstanding quality" of the surface for the final. Thanks to the backup provided by Barenbrug, it has played its part in helping us produce a pitch worthy of one of the biggest club games in European football, which we are extremely grateful for."