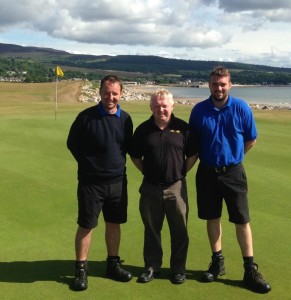 Golfers at one of the UK's most northerly clubs are back out enjoying their game after it was devastated by a massive storm in December!

The worst weather in Golspie Golf Club's 125 year history saw the sea defences breached which brought a deluge of seawater and rubble onto the course.

In some places the water was 12ft high, the seventh tee had vanished and there was about a quarter of a million tons of debris, including massive boulders, littering the course.

It was a terrible blow for the Scottish club which was ranked 54th in the National Club Golfers UK Top 100 links courses and 69th best course in Scotland underlining what great recent work had been done at Golspie.

But the freak weather conditions now left head greenkeeper Alexander MacDonald with a major headache - just how was he going to get the course back into shape?

"My first reaction was shock and I thought six years of hard work from myself and my team had been wiped out," said Alexander MacDonald. "But the next day the sun was shining and it made us all determined not to be beaten."

With the help of over 100 volunteers both club members and people from surrounding golf clubs and the loan of equipment from local firms, the first priority of clearing away the rubble and debris began and was achieved in just four days. The club was also boosted by the offer of help from leading seed producer Barenbrug.

By Christmas eve there was a firm plan in place for the restoration of the course which in fact reopened in May - the result of many ten hour days by Alexander and his two greenkeepers.

"Given the unique nature of the circumstances we were happy to offer Alexander and his team some complimentary bags of our leading golf seed mixes to help them get on with the massive job in hand," said Barenbrug marketing manager Paul Warner.

"Our research & development manager, Dr David Greenshields, visited the club to offer his expertise and help Alexander to get the course up and running again as quickly as possible."

A major issue facing Alexander MacDonald was that he had been advised by the insurers to completely strip fairways, tees and more importantly greens contaminated with sea water and then carry out a programme of returfing. It was something he was desperate to avoid because there would be five greens with completely different characteristics from the others at Golspie.

"While nothing like the problem facing Alexander, salinity can often be an issue with links golf courses" said Dr David Greenshields. "So at Barenbrug as part of our continuing research & development programme we developed a special seed mix, BAR Trio, whose three slender creeping red fescues are specifically selected to offer superior germination and subsequent tolerance in saline conditions.

This would help Alexander recover the five which had been flooded without the need for returfing. For those not affected by salt we suggested BAR Fescue, a 50/50 blend of chewings and slender creeping red fescue.

We recommended he seed in March/April depending on the weather at a rate of 20kg per green. Then seed with BAR All Bent, a mixture of Barking and Hariot browntop bent in May/June at 3kg per green.

We have been delighted with the way all the seed mixtures have performed at Golspie which combined with the great work Alexander and his team have done has made the course one to be proud of once again."

Said Alexander MacDonald, "Seeing the course the day after the storm nobody could have imagined that within five months it would not only be playable again but overall in a better condition. That was down to the hard work and support of many people including Barenbrug whose offer to donate seed and give us technical advice was gratefully accepted. Their products in my opinion are second to none and David Greenshields always gives extremely helpful advice. We have been encouraged by comments from members and visitors alike and will continue to improve this great old course."

BARENBRUG SEEDS are available from the Pitchcare Store