Expected to set a new standard in luxury leisure in the northeast of England, the Rockliffe Hall Hotel, Golf & Spa development near Darlington is due for completion in 2009. The 150-hectare resort is already home to Middlesborough Football Club's state-of-the-art training facility and the historic Rockliffe Hall, a run-down 19th Century mansion that is being sensitively converted into a 63-bedroom five-star hotel. 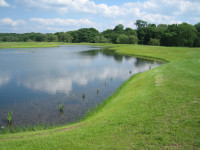 The highlight for golfers, however, is a 116.2-hectare golf course that, at over 7,800 yards from the back tees, will become one of Europe's longest. Designed by Marc Westenborg of the renowned Hawtree design and built by MJ Abbott Limited, the challenging course is complemented by an extensive driving range, grass-roofed clubhouse and practice area.

In order to achieve the rapid establishment and aesthetic appearance required by the architect, the course's tees, fairways and roughs have been sown with two specially created Barenbrug grass seed mixtures. The fine-leaved Bargold-based perennial ryegrass mixture sown across the tees, fairways and roughs, as well as the fescues and bents mix featuring chewings fescue, Bargreen, sown across the maintained roughs, also suited the course's likely maintenance regime.

MJ Abbott's contracts director, Nigel Wyatt, reports that the mixtures are performing well. "The first six holes were sown in autumn 2007 and established well," he says. "Better results were observed with the next six holes, which were seeded mid-May 2008. The seed was up within two weeks due to the good spring temperatures and moderate rainfall. We're pleased with the results."