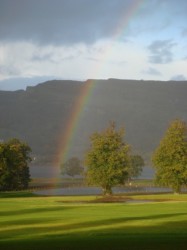 The Earl of Mar Estate near Glasgow is already home to one of Scotland's leading luxury hotels, Mar Hall. But this historic site will soon boast a brand new 18-hole golf course, which has been sown with Barenbrug grass seed.

Designed by famed-golfer-turned-course-designer David Thomas, the 160-acre par 70 Earl of Mar Golf Course measures over 6,645 yards and is expected to open for play in late 2009. Course manager Gordon Kerr reports that the Barenbrug mixtures sown across the course, which is set on the banks of the river Clyde and offers spectacular views of the surrounding Kilpatrick Hills, are establishing well.

"Construction started in May 2007 and, having been hampered by bad weather, we began seeding the course this July," Gordon comments. "We seeded the tees and fairways with Bar Platinum and the greens with BAR 2. The first four greens we seeded came up in just five days as the weather was humid - perfect grass growing conditions - and you could almost play on them now. I'm really happy with the greens."

Having been mown five or six time since the first sowing, Gordon also managed to squeeze in some further seeding of the fairways before bad weather took hold in late September. He now plans to do the remaining overseeding and complete the planting in spring 2009. The roughs, which are set to be sown with a specially created Barenbrug West Coast mixture, will also now wait until the clement weather comes in the spring.

"This must have been the wettest summer we've had on record," Gordon reflects, "so we were panicking about whether we'd get the seeding done at all! We even thought about using Barenbrug's fast-establishing BAR 50 SOS and then overseeding with the original mixtures in the spring, but thankfully we managed to stick to our plans. I'm a very laid back person by nature, but this is the only time I've ever been really stressed!"

Despite the dire growing conditions, Gordon is delighted with the Barenbrug mixtures' performance. "Everyone's very pleased with the course's appearance," he comments. "We have high hopes for the mixtures' performance when we open for light play in summer 2009 - we intend to be open 365 days a year, so they were selected for their hard-wearing characteristics, particularly on the tees."

But Gordon has confidence in his choice of grass seed. "We chose Barenbrug from three seed companies as it simply had the best portfolio," he adds. "It's got a great reputation. I've been working at golf clubs for 32 years and it's a name I've always been aware of and a seed I've used, plus all the top golf and football clubs - that's what they're choosing.

"We felt it was the best to go with and that decision has proved a wise one so far. I'd like to give the company's Scottish sales manager Billy Nimmo a special mention for his advice and willingness to visit the site whatever the weather or problems we faced. He was involved from the very start and was overall a great help to the project."

Photo caption: The Barenbrug grass seed sown at the Earl of Mar Estate Golf Course has successfully established in spite of the bad weather.