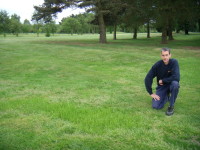 The north-Leeds course was hit by heavy flooding in summer 2008, leading to the severe loss of cover. Head greenkeeper Trevor Smith faced the daunting task of restoring grass cover during the colder winter months in order to ready the course for spring play.

As he explains: "We'd lost a lot of cover on the fairways after the floods, with these areas prone to being 'washed out'. We needed fast and extensive recovery, so overseeded with BAR 50 SOS and BAR Extreme in early March. Temperatures were very low, but the SOS really did the job, establishing very quickly and getting us green again.

"The SOS is acting as a parent grass for the BAR Extreme and will eventually die away to leave us with the finer-leaved appearance of the Extreme. I overseeded an area on the 18th hole with just the Extreme and it was remarkable how quickly the SOS came through by comparison. It's certainly helping the Extreme come through."

In anticipation of the benefits BAR Extreme will bring to the course - from its fast establishment and superior fineness of leaf to its extreme wear tolerance and recovery - Trevor has been experimenting with the mixture on other parts of the course, which was first constructed in 1912.

"We have a bridle path running through the course that's rubble and clay as it's actually a century-old coal mining track," he adds. "It's not only used by walkers and horses, but also by our course maintenance vehicles, so is heavily compacted and very poor quality soil. I put some BAR Extreme on the path in late spring to try to improve cover and it came up just two weeks later."

Trevor continues to use BAR Extreme to improve sward density and wear tolerance on his tees and green-surrounds supplemented by BAR All Bent on his greens during spring and summer. "The BAR Extreme looks great and grows almost anywhere. It's the finest ryegrass I've ever seen, which is very impressive. We've been using Barenbrug for a year now and are really reaping the benefits - it's quality stuff."