by External source
in Industry News
on 09 Jan 2015 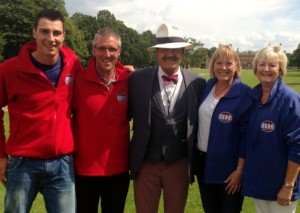 A husband and wife from Donington on Bain battled it out after they were pitched against each other on BBC show 'Bargain Hunt'.

Kenwick Park Golf Club's office manager Diana Lidgard was delighted when her husband, head greenkeeper Simon, came home and announced he had got an audition to be on the show.

Diana thought that Simon would be taking her along on the show, until he revealed to her that he would actually be teaming up with his colleague Lewis Hackett.

Not to be outdone, Diana decided to apply with friend and long-standing Kenwick Park member, Di Everitt.

Both teams were successful in being selected and, despite attending separate auditions, the BBC decided to pitch husband against wife.

The rival teams, guided by experts from the world of antiques, purchased items for auction at an antiques fair. Jonathan Pratt tutored Simon and Lewis's team, whilst Anita Manning assisted the two Dianas.

Diana Lidgard said: "Being on Bargain Hunt was great fun, and the experts were super and they made us feel at home.

"There was a bit of gentle ribbing and teasing between me and Simon during filming, but all good fun - there haven't been any divorce papers! It was a great experience."

The two teams then attended an auction in Etwall, Derbyshire, to watch their items being sold to the highest bidders to find out which team had made the most profit, or the smallest loss, to win.

You can watch the show on BBC iPlayer HERE - although Simon and Lewis probably won't want you to!!!