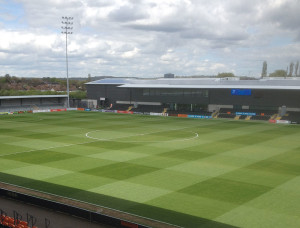 For the best part of their history - they were founded in 1888 - Barnet Football Club played their football at the Underhill Stadium in Barnet, before a short hop across the M1 saw them establish a new home in the London Borough of Harrow in 2013.

Nicknamed 'The Bees', it seems only fitting that their new stadium was named 'The Hive', and it was from here that the club won promotion out of the Conference at the end of last season, a situation they are not unused to, having 'buzzed' in and out of Football League Division 2 fairly often in recent decades.

For a 'small' club, the facilities are impressive. The stadium is used by Barnet Football Club, London Bees Ladies Football Team and London Broncos Rugby League team. Additionally, there are ten outside grass pitches and two full size 3G pitches which are used by the 1st XI for training, the Academy for matches and training and many local community clubs throughout the year.

Charged with looking after the facilities is Bob Mills, who joined the club as Head Groundsman ten months ago. "I started out at my local cricket club looking after the square, when no one else was able to so, and enjoyed doing it so much I found myself moving into the industry. There was a new golf course being built and I joined the construction team. I became deputy head greenkeeper within a year and stayed for about four years, seeing the project from farmland to golf course."

"For various reasons, mainly family and finance, I moved away from the trade for a while, but retained the interest and continued at the cricket club and also worked privately on some landscaping jobs. I returned to the job about ten years ago at Bishops Stortford Football Club. I'd supported the club since 1972 so, when the opportunity came to work there, following the retirement of the groundsman, I was only too pleased."

"Before coming to Barnet, I was working for a landscaping company. I guess you could say that I learnt 'on the job', but I do now have all the relevant spraying certificates etc." 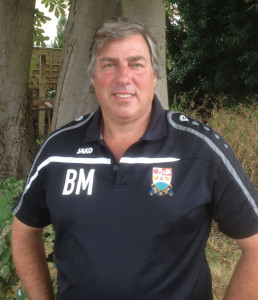 "Over the years, I have built up a good network of friends and colleagues that I feel happy to talk to about things; people like Andy Clarke, the ECB Regional Advisor, and Mick Fance at Everris. We have an agreement in place with Symbio and I get great assistance from their rep Laura Nelson, and particularly her predecessor Phil Garrod (now Head Groundsman at The Honourable Artillery Company in London); it's a product I firmly believe in. I also talk to my two sons a lot about the industry. Rob is Head Greenkeeper at Blue Mountain Golf Course in Berkshire and George is Head Groundsman at West Herts Cricket Club. We have most sports covered!"

Assisting Bob are twenty-nine year old Mike Mair, who has been at the club for two years, Sam Williams (24), who joined in March of this year as Bobs number two, and two apprentices, Dan Gardner and Luke McCarthy. Bob is currently looking for another apprentice.

"I believe that providing ongoing training is an increasingly important aspect of my role, and I ensure compliance with current legislation, which is vital. We have Oaklands College not far from us, and are currently signing up two of our staff to
NVQ courses."

The stadium pitch is 90% Fibresand and, says Bob, "the construction and drainage is great, but it does require a lot of water and regular feeding. We don't have the luxuries of undersoil heating or lighting rigs, but we do have frost covers."

The stadium pitch is in use for twelve months of the year, so the maintenance procedures are on a 'little and often' basis as far as overseeding and dressing is concerned. "We vertidrain monthly," continues Bob, "and, now we have the machinery available in the form of two Dennis mowers with cassettes, we scarify or verticut regularly. All other areas are treated the same, but with less intensity. We also have a new John Deere tractor, Team Sprayer and Amazone Flail with scarifier, for the stadium. We use a John Deere 7700 five unit Precision Cut fairway mower and an AS Motor Sherpa banks mower on the training ground pitches and banking. We do as much of our own servicing as possible, but we have a very good relationship with our local dealer, P. Tuckwell, when anything outside our expertise is required and for new purchases." 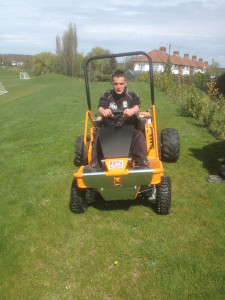 "The stadium pitch is obviously our shop window, and presentation is key, but I also like to take that sense of pride onto all the outer pitches. These are scarified, overseeded, fertilised and dressed, and the aim is to rotate this work so there are always areas available for use. Regular soil testing and pH testing is done on site."

"The fringe areas of the site are not to the standard that I would like currently, and we are looking at ways and ideas to improve this."

The two 3G pitches, which were installed back in 2009, are brushed regularly and have thorough periodic checks as per the manufacturer's recommendations.

"Budgets are controlled by the Club Chairman," confirms Bob. "I make the relevant proposals and he authorises as he sees fit and finances allow. Fortunately, he has a good understanding of all that is required. Naturally, budgets will always affect clubs at our level."

"We spray out weeds as required and use Symbio products to control disease, to a great degree. The biggest problem we have is foxes chewing the nets on the outer pitches; these are raised, when not in use, to stop this."

"The site is quite exposed, so can be quite windy. Our chairman is very keen that we are seen as good neighbours - we have a lot of them - so we need to be seen to be conscientious where environmental matters are concerned. For example, we are considering some form of water harvesting."

Outside of his 'day job' Bob is a new grandad, Chairman of Thorley Cricket Club (where he's played for forty years this season), Fixtures Secretary of the Herts & Essex Cricket League (since 1996), a Level 2 cricket coach and a qualified umpire.

He confesses to being a poor golfer; "I can't understand how a game I love, treats me so badly!"