Barry Pace - honest, honourable and nice (his words, not ours) and enjoys a bit of a rant, apparently! 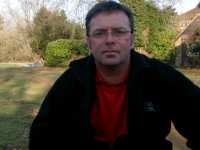 Who are you? Barry Pace, Contracts Manager with Speedcut Contractors Ltd, running specialist golf and sport construction works alongside the existing drainage teams.

Status? Married with three great kids aged 21, 18 and 14, one dog, one cat, one rabbit, one dab tailed lizard and several fish (well they are all dependants).

Who's your hero and why? Anyone who goes out of their way to help others, especially those who risk their lives as a job or just by being in the right place at the right time.

What is your dream holiday? Anywhere where the sun is warm, the beaches are clean and a bar is not too far away from where I can fish off the rocks… oh, and fish that bite.

What annoys you the most? Peoples' ignorance, self delusion, rudeness and not giving a damn for others.

What would you change about yourself? Too many things to list. (Edit after checking my answers) To calm down more and rant less (lol).

Who wouldn't you like to be? Oooh, so many choices. A politician, I really couldn't sleep at night from all the bull. A policeman, I wouldn't last long being PC tied. Clamper, again sleep deprivation. The list is so long!

Favourite record, and why? Prince Buster, Al Capone - lots of memories of being mad, bad and bit of a lad when a lot younger.

Who would you choose to spend a romantic evening with? My good lady of course ... unless Brad let Angelina out!

If you won the lottery, what is the first thing you would do? Sort out a few things from the past and get rid of my mortgage asap.

If you were to describe yourself as a musical instrument, what would you be? A saxophone. When played well it is a beautiful sound, when played badly it really really gets on your nerves!

What's the best advice you have ever been given? The day you stop learning is the day when you need to remember how to dig a hole 6ft long, 6ft deep.
What's your favourite smell? A baker's first thing in the morning or the waft of bacon just before break time.

What three words would you use to describe yourself? Still mad, bad and bit of a lad (lol). No, actually, I would say that I am too honest, honourable and nice for my own good.

What talent would you like to have? To predict the weather and the ability to get others to remember what the weather was actually like before yesterday.

What makes you angry? Muppets in general. People who don't understand the Highway Code, such as lane hogging, fog lights. Megalomaniacs who are employed in anything that involves rules or regulations. Eco/Health/H&S/PC fascists who impose their madness on our asylum. The Courts and the crazy way they deal with low life. Banks, the Government, people that bang on about carbon footprints, what's that all about? Is the UN going to fine Australia? My god, I really must rant less and calm down!

What law/legislation would you like to see introduced? Life is life, not a few years. Actually, Law and Order in general - it would be good to see that introduced to this country. Banning of all EU directives. All unemployed to do voluntary/community work to get benefits. To become compulsory for all civil servants to understand that we pay their wages ... I'm ranting again, aren't I?