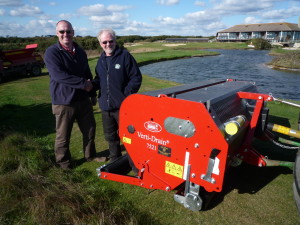 Barton-on-Sea Golf Club is a stunning, cliff-top golf course between Highcliffe and Milford-on-Sea with views across the Solent to rival anything on the south coast. Founded in 1897, the old 18 hole golf course was falling into the sea but was re-developed in 1991 onto an adjoining farm.

When they first got their Redexim Verti-Drain™ 7521 from Charterhouse Turf Machinery it took a year to see the benefits, but beyond that the difference it has made to the surface is very obvious. Now in its third season, the 7521 is being used from late October to April when conditions allow.

"The work we do over the winter," says Tony, "is beneficial for the summer months because the course used to dry out very quickly, but now it holds onto the moisture better because the roots are deeper. The sward density has improved along with drought tolerance and drainage. It's fair to say that this single piece of equipment has transformed our fairways and semi roughs more than any other piece of equipment."

With 27 holes the Verti-Drain™ 7521 has a fair amount of ground to cover but Tony says he usually gets over all the fairways & semi-rough at least twice a year. During the wet start to 2014 the club has been unable to use it on wet days due to the tractor leaving marks on the surface. However, as soon as a dry spell came the 7521 was out every day using 12" tines with the machine set at a lower speed to achieve a tight spacing.

Tony only oversows the greens in the autumn, mostly with Bent & Fescue mixtures, and tends to use liquid fertilisers through the growing season. On the tees he uses a base feed and then usually a nitrogen spray with a granular feed towards the end of March on the fairways.
Tony's local dealer is New Forest Farm Machinery who recommended him to take a look at the development of the Redexim machines. He has not been disappointed and when he adds additional aerators to his machinery list in the future he will only consider Verti-Drain™ products.