The Recreation Ground is set for a facelift and an increased capacity after Bath received planning permission for a new temporary stand and four-year planning consent was also given for the existing stands. 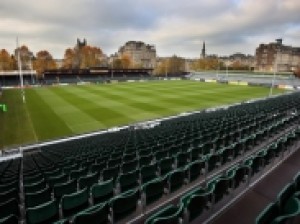 The capacity of the ground will now be increased from 13,500 to 14,500 after members of Bath and North East Somerset Council's development control committee sanctioned the proposals to replace the wooden West Stand.

And permissions for the North, East and South Stands was also renewed, which is positive news for the club as it continues to work towards a permanent solution at the Rec.

Bath managing director, Tarquin McDonald, said: "We are delighted with today's decision. By consolidating planning for the next four years, we wish to move the debate away from planning around the temporary stands - which need to be renewed every year or two - and focus on working with all stakeholders within the city to produce a full development proposal.

"Bath Rugby remains committed to providing a world-class facility in the centre of Bath; one which provides enhanced use for the community and which reinvigorates the riverside area in the heart of the city.

"In the meantime, the much-needed redevelopment of the West Stand will provide our supporters with the best possible game experience, with improved sight lines, more leg room and enhanced facilities. In addition, the increased capacity will allow more people to enjoy rugby at the Rec and bring in an extra £5 million to the local economy over the life of the consent."

It is reported that the extra 1,000 spectators will bring £1.3 million per year to city centre businesses and generate £2 million gross value added to the economy in the South West over the course of the four years.

For the original article, visit www.runningrugby.com.