by Mark Witherall
in Conservation & Ecology
on 19 Jun 2010

"The inspection of buildings and trees for bat roosts is often an essential component of a planning application and, after the inspection, activity surveys may be required"

It would be safe to assume that bats will be flying around most golf courses in the UK at night during the late spring, summer and autumn, foraging for insects around wooded or shrubby margins and the rough, or over lakes and ponds. Even on a links course bats may be found foraging on cliff edges. They may also be roosting somewhere on the course, perhaps in holes in mature trees, or even in the clubhouse roof or other out-buildings.

Bats are one of the most misunderstood animals in the world. With their nocturnal habits and association with things that go bump in the night, they seem to instill nervousness in many. But these are truly amazing animals.

There are over 1100 species of bats across the world, making up about one fifth of all the world's mammals. They are found on every continent, except Antarctica, and are incredibly diverse. In the UK there are seventeen species of bat (including sub-species), ranging from the widespread pipistrelle (Pipistrellus pipistrellus) to the rare barbastelle (Barbastella barbastellus).

Through the winter, bats will be hibernating. They will have sought out cool, damp areas where they can roost, waking up every few days to urinate and defecate and to have a drink, so it's possible that you might see the odd bat flying around over the winter.

The bat year begins when they emerge from their hibernation roosts. Emergence time can be influenced by weather or physical condition, and can begin as early as March or as late as May if there has been a bad spring. Times may vary between individuals and species. Maternity roosts are usually occupied in May, where bats usually remain until August or September.

The gestation period in bats begins in spring after which they give birth to a single pup (twins are rare) in June or July. (Mating has already taken place in the preceding autumn and sperm is retained). The gestation period lasts from 40-70 days, depending on species and available food resources.

Birth is highly synchronised within a colony where a large percentage are born within two-three weeks of each other. Bats, being mammals, suckle their young, they remain attached to the female in the roost, except when she has to go out to feed and young bats are then left in nursery clusters until females return; they recognise their young by smell and calls. Sometimes bats will move roosts and carry their young to the new roost.

Mating begins from late summer, autumn and can continue into winter. Female bats may disperse from maternity roosts to smaller roosts or mating roosts. Males will have roosted singly, or in small groups, throughout the summer.

After feeding up to increase their fat deposits, in late autumn and early winter, bats take to their hibernation roosts, in the main selecting cool, relatively humid sites with a stable microclimate and free from disturbance. Site selection varies between species; but most British bats will use caves, mines, cellars and tunnels. Some, such as pipistrelles, will hibernate in stone or brick wall cavities, others such as barbastelle and brown long-eared bats, will hibernate in trees.

The summer is when bats are most active and when you are most likely to see them. I expect you, like me, will have been sat out enjoying a cold one on a warm summers evening and had bats flying around your garden or golf course! At this time they will be feeding, catching insects on the wing, gathering energy and building reserves for the coming winter. Importantly, bats will be feeding young as well through the early summer.

It is often the case that bats will have different winter and summer roosts; in addition there will be special mating roosts in the autumn along with roosts that are just used to rest-up or feed at night. The numbers of bats within a roost can vary from one or two to hundreds of individuals.

A common myth about bats is that they only roost in churches and old buildings. In fact, some bats will also use modern buildings. Pipistrelles, in particular, are very adaptable and will squeeze into gaps as small as 15mm wide, and can be found roosting under roof tiles, soffits, in cavity walls and loft spaces. In addition to buildings, bats will roost in a variety of places, including, caves, bridges, walls and trees.

So, how do you know they are there? In an initial survey, evidence such as greasy marks around access points, or droppings on the floor, wall and window sills will be looked for, and these signs will give away the presence of bats. If there is evidence of bats, then activity surveys will need to be carried out.

Surveys involve trained surveyors going out at dusk and dawn, with bat detectors, recording bats flying around, and, hopefully, identifying where they are roosting. 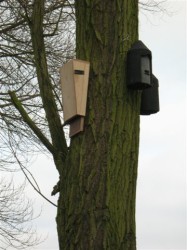 e main possible roosting areas for bats on golf courses will be in buildings, trees, caves and cliffs, and these would need to be assessed in terms of potential for being habitat to bats.

Generally speaking, bat activity surveys are carried out between May and mid-October when bats are not hibernating. Building and tree inspections to identify bat roosts can be undertaken at any time of year.

Bats and the law

Bats have declined alarmingly over the past 100 years for a variety of reasons - these include habitat loss and fragmentation, a reduction in insect numbers, the destruction of roosts and the use of toxic timber treatments in roofs. Climate change also threatens bats; a milder spell in winter can rouse them from hibernation when there may be little food resources available.

Due to these declines in populations, bat species and their roosts are now fully protected under the Wildlife and Countryside Act 1981 (as amended) through inclusion in Schedule 5. All bats are also included in Schedule 2 of the Conservation (Natural Habitats &c.) Regulations 1994, which defines 'European Protected Species of animals'. In net effect, it is a legal offence to:

In summary, bats and their roosts are fully protected so, if there is a winter roost in a building, which is unoccupied in the summer, the roost is still protected in the summer! In fact when occupying a roost, bats can still go totally unnoticed for long periods of time.

If you are considering any development works, demolition or tree felling, it is wise to consider bats early on in the planning process. The inspection of buildings and trees for bat roosts is often an essential component of a planning application and, after the inspection, activity surveys may be required.

This will help avoid unnecessary delays. For example, having to wait for the survey season. If bats are discovered during the work itself the whole job may have to stop! One case in point is the Jack Nicklaus-designed course at St. Mellion, Cornwall when, in 2007, hibernating brown long-eared bats Plecotus auritus delayed the £100 million refurbishment of buildings in the complex.

A situation where bats should be considered, which may not obvious at first is the construction of driving ranges, which would be floodlit at night. Although some species of bat can be attracted to the insect prey that fly around floodlighting, other species will actively avoid it. A bat survey would be recommended before such development goes ahead. If there was a roost in close proximity to such a development it may cause the bats to desert the roost. The proposed range may be a good foraging area for bats, which would likely be impacted by the presence of floodlighting.

I have often heard it said: "If you have bats in your building then that's it, 'they' won't let you do anything". But, the truth is, having bats in a building very rarely restricts a development to any significant degree.

In practice, there are many things that can be done to mitigate or compensate for the loss, or potential disturbance, of a bat roost. Taking bats into consideration should be viewed as an opportunity to make a positive contribution to conservation, and golf courses are ideal sites for enhancing habitats for bats, for example, putting bat boxes up on trees or buildings to improve roosting habitat or planting shrub species particularly attractive to insects. This not only helps bats, but also enhances the golf courses' environmental profile.