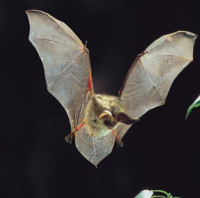 From today 22 May 2008 (International Biodiversity Day), for the first time bat and wintering waterbird numbers will be used to measure the health of the UK's wildlife.

They join other wildlife indicators published today as part of the UK and England Biodiversity Indicators.

Bat species are some of the UK's most common wild mammals, found throughout urban areas, farmland, woodland and river/lake systems. Strict legal protection, direct conservation action and education, and warmer winters have all helped bats on the slow road to recovery since 1999, following long term declines in their numbers in the second half of the 20th Century.

Bat populations remain vulnerable, which is why they serve as a good indicator for the wider health of the UK's wildlife. Pressures faced by bats including landscape change, agricultural intensification, development, and habitat fragmentation are also relevant to many other wildlife species.

The six bat species which will now be used as indicator species are the Daubenton's bat, the noctule, lesser horseshoe, common pipistrelle, soprano pipistrelle and serotine.

Wintering waterbirds such as the Whooper Swan have also been included in the UK Indicator for the first time, helping to measure the effects of a changing climate. A recent decline in numbers has been associated with a spate of warm winters allowing the birds to remain in continental Europe.

The overall trend of the indicators published today shows that since 2000 there has been general slowing and halt in the long-term decline in populations of key species or habitats. However it is important that efforts to halt declines are maintained.

Joan Ruddock, Minister for Biodiversity said: "The state of our wildlife is an indicator of the health of our environment and life itself. We can be proud of our efforts to slow and halt the decline of wildlife. More money is being spent, more people are volunteering for conservation and more woodland and farmland is managed for wildlife.

"Bats are integral to the environment and are a good indicator of the wildlife we often don't see - such as the insects they feed on.

"The evidence for all the indicators gathered by organisations such as the Bat Conservation Trust and its volunteers is invaluable to better focus research and conservation action."

Amy Coyte, Chief Executive of the Bat Conservation Trust said: "Bats are an excellent indicator of the state of the natural environment. As our wildlife continues to struggle against many threats, it is vital to have indicators of whether current efforts are working. By adding bats to the suite of indicators, we will gain a greater understanding of how our wildlife is faring."

Also published today is the list of habitats and species of principal importance for the conservation of biodiversity in England under the Natural Environment and Rural Communities Act 2006.

The 56 habitats and 940 of the species are already prioritised for conservation by the UK Biodiversity Action Plan. In addition, the Hen Harrier has been included on the list in light of the severe declines this bird has suffered in England.

Also published today are the wild bird population indicators for the English Regions 1994-2006.